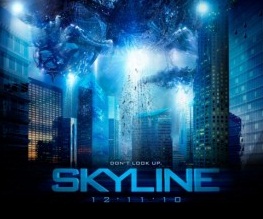 The theatrical trailers for Skyline generated a fair amount of excitement around the oft-repeated concept of an alien invasion. The intriguing concept of people being drawn like moths to a hypnotising blue light, then beamed up into huge alien ship was a promising set up for what was to come.

Jarrod (Eric Balfour) and Elaine (Scotty Thompson) are a young couple staying in LA to attend the birthday celebrations of their friend Terry (Scrubs‘ Donald Faison). Once the party is over, the blue lights invade, and begin to abduct the population of the city. Jarrod is exposed to the light, but is prevented from being drawn in.

First, the positives – Skyline’s special effects are excellent, coming from the fact that the filmmakers (The pretentiously named “Brothers Strause”) made their name in this department on such huge blockbusters as Avatar and 300.

Right, that’s the formalities out of the way, now for the negatives. Skyline is without a doubt the worst film of 2010 – and can even stake a claim to being the worst film ever to be released in cinemas. All characters apart from our main couple are completely expendable, and as such are not given any real characterisation – despite some of them appearing for well over half of the film, only to be killed off as an afterthought. We know Jarrod is the hero because we see him help a fellow airline passenger with their luggage – that really is the the pinnacle of characterisation in this film. As such, we are not led to care about any of the characters, and I found myself waiting for them to be killed off just so that something could actually happen. The actors do little to help on this score, and the dialogue is so bad it’s laughable – perhaps the worst moment being when a character sees a video of thousands of abductees being swept into the sky and remarks “Oh my God…all those people” As if she were reporting on an overcast morning with sunny spells later.

When we are introduced to the aliens, the sheer amount of unashamed rip-offs are made clear – Independence Day, Aliens, The Matrix and District 9 are all called upon so blatantly that is really does seem as though the entire film has been copied and pasted. One scene is almost entirely a shot-for-shot remake of the unsettling basement sequence in War Of The Worlds.

The directors are unable to resist the repeated use of almost comedic slow-motion, and the sequence in which they were required to convey the passing of time ( I know! Lets use FAST MOTION!!!) is so misjudged as to actually draw laughs from the audience. A further insult to the intelligence of viewers is added when the same jump – a harmless old man popping out from round a corner – is used to break the tension twice within 20 minutes.

MINOR SPOILER ALERT – The initial premise of Skyline is promising, and some genuinely creepy images are included. Sadly though, these are blown out of the water by the ludicrous events of the second half of the script, including a thermo-nuclear missile being fired directly into the heart of LA without any apparent structural damage – our heroes are safe behind their double-glazing, and even watch the detonation through a telescope.

But overall, indestructible curtains and old man-based scares aside, the worst problem with Skyline, is that it commits the cardinal sin of any action film – it is boring. Really boring. Long, drawn out scenes of characters doing nothing more than staring dumbly at each other are prevalent, with not even a few morsels of the awful dialogue to entertain us. I have had more fun organising excel spreadsheets than watching this film.

When criticising a film, it is important to remain fair, and to remember that a lot of time and effort goes into its creation. However, audiences work all day to earn their money, and to ask us to part with the same amount to watch this tidal wave of shit as it would cost us to watch Inception, Avatar, or even Epic Movie is an insult.