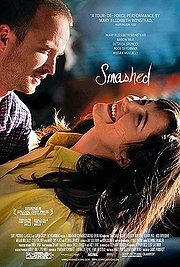 Alcohol is everywhere. Adverts on TV and billboards tell us all to get out there, drink up, do some shots and be more fun than you really are. As long as we are all drinking “sensibly” then the manufacturers are happy. But what happens when sensible begins to get redefined every time you go out on a bender? This is exactly what happens in Smashed, and soon the lines get blurred, the boundaries all become a little out of focus and sensible is taken to mean lying to your colleagues, smoking crack and watching your world fall apart.

Katie (Winstead) adores her husband Charlie (Paul) and together they have night after night of wild hedonistic fun. Charlie is a trust fund baby who pretends to work in the music industry whilst Katie works hard everyday teaching a kindergarten class of feisty kids. There is just a slight problem. They are both raging alcoholics. Katie frequently gets so drunk she wets their bed in the night and has nips from a hip flask in the car on the way to work to help ease her shakes. One day whilst suffering from a particularly bad hangover, Katie vomits in front of her class forcing her to pretend to them that she is pregnant and is given the rest of the day off work. That night heading out for another stint at the local bar, Katie smokes crack with a homeless woman and realises that things need to change in her life before it is too late. Enrolling in A.A however is the easy part. Katie soon discovers that her addiction was hiding a whole host of problems and tackling these head on means that her relationships and lies begin to break down. 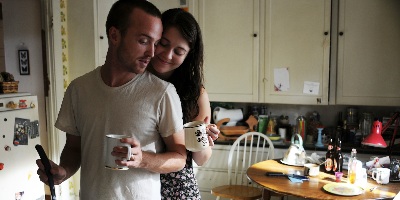 Initially Smashed looks like it will follow the path of conventional tales about alcoholic main characters with the decision to change coming right at the end. However things take an interesting turn early on with the main bulk of the film focusing on Katie attending A.A meetings and finding her down to earth sponsor (Spencer) to help guide her. It all feels like arty independent cinema. The camera work is shaky all the way through helping you feel as drunk and wobbly as the alcoholics and the music and costumes are all overtly quirky. This is the film’s biggest problem, it tries far to hard to make everything fun and alternative throughout and in doing so completely bypasses the emotional pull the characters should have over you. Katie is a strange character being both quite loathsome whilst oddly lovable. Her struggle to get sober though feels about as dry as a Mormon party. Mary Elizabeth Winstead does a brilliant job as Katie, but there are moments when it all feels forced. It seems as though Winstead knows this is the type of role that will catapult her towards some serious award nominations, and therefore at times feels somewhat clinical. 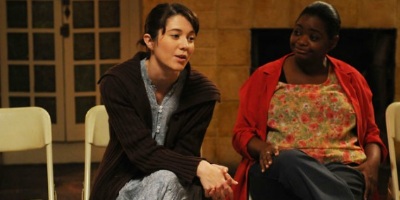 Smashed does have some brilliant moments of comedy in it and tries to keep a sense of fun to the proceedings rather than sounding like a twelve step program of pretentious cinema. All of the cast play their parts very well with Nick Offerman (looking just like a fatter Eddie Izzard) stealing a lot of the scenes as Katie’s colleague and fellow member of A.A. Sadly the plot of Smashed feels a little bit formulaic and you know that eventually the inevitable end of act two relapse will come storming along, which it does, with what again should have been an emotional massacre but is more like a drive by shooting. Quick and painless.

Smashed is touching in parts and it is enjoyable to watch too. Sadly it just needed an extra shot to help it really come to life. Ultimately Smashed winds up being just like trying to remember a wild night out. It must have been enjoyable at the time, but the next morning you can’t recall anything at all.
http://credit-n.ru/offers-zaim/creditter-srochnye-zaymi-online.html http://credit-n.ru/zaymyi-v-ukraine.html