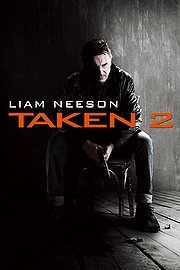 Taken 2 is the cinematic equivalent of a ready-meal; it’s never going to win any awards but it hits the spot and there are no surprises. If viewers don’t expect too much from Taken 2 and instead, just take it for what it is, there’s no reason it shouldn’t serve as a perfectly good bit of action/drama fodder for the masses. The film is set one year on from the events of the previous film and sees former CIA operative Bryan Mills forced out of retirement when the father of the kidnapper he killed in the first film employs a bunch of gangsters to kidnap his wife and daughter.

As sequel concepts go it’s not the worst we’ve come across and kudos must be given to director Olivier Megaton for taking a fairly decent stab at establishing some continuity between the two films. However, had the concept been as flimsy as a sheer pashmina, it wouldn’t have made a blind bit of difference. The audience that will pay to see this film are not an audience that are overly interested in plausible narrative and back-story. The majority of patrons for this film are largely paying to see Liam Neeson deliver a chilling monologue before he goes around shooting the crap out of shady gangsters. And that is exactly what he does. There are shoot-outs, there are explosions, there are the fast-paced car chases that featured in the first film, except this time with the lovely addition of lovely lithe Maggie Grace running around in a bikini with just enough tendrils of loose hair wisping about her face to make her look both believably flustered and unbelievably sexy. In many respects, Taken 2 does exactly what it says on the tin, and fans of the original should be more or less satisfied with this sequel. 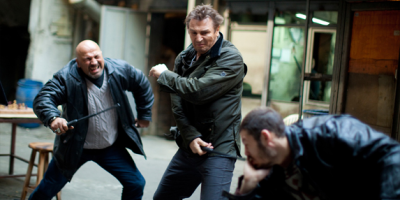 The main problem with Taken 2 is that it never really takes any risks. Megaton (if we had a pound for every time we misspelt that as ‘Megatron’ we wouldn’t need to sell our clothes on Ebay) has either only just worked out how to use a camera or actually intended for the audience to feel sea-sick every time there was an action scene, because the shaky-camera effect that is used throughout the entirety of the close-combat action scenes makes it virtually impossible to a) digest what’s happening and b) feel the full impact that’s required. This is almost certainly a negative consequence of the sequel’s 12A rating, and the film suffers for it. We appreciate that Liam Neeson is getting on a bit, but so much of the original film’s success was dependent on the audience’s complete and unwavering belief in Bryan Mills’ ability to kick ass when required. Sadly, Taken 2 just doesn’t give the audience a clear opportunity to buy into this idea.

There are also some questionable decisions made around the portrayal of crime lord Murad and his host of consorts. The never-ending series of inter-changeable Algerian baddies that are forever chasing Bryan and his family around do get a tad wearing after a while and Rade Serbedzija’s villain is laughably one-dimensional. This lack of character development can also be levelled at Famke Janssen, who spends what feels like an unnecessary length of time playing the bleating ‘damsel in distress.’ A lot of the sequences which feature the actress feel like padding and there is a definite sense that the X-Men actress is just phoning it in. Having said that, it was nice to see Maggie Grace take on a much more active role here, and there are some great sequences where the father-daughter pairing take on several action sequences together that work really well. 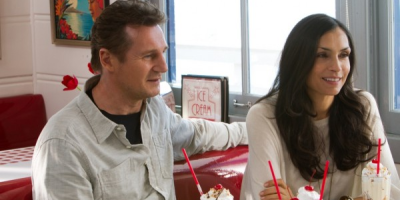 Taken 2 never quite achieves a significant semblance of the brilliance of the first film but it tries. The film makes quite a lot of Bryan’s superhuman intelligence abilities and these will be the sequences that the audience truly enjoys. A massive suspension of disbelief is required: characters let off grenades in crowded city centres with no casualties, Bryan reels off lists of highly technical instructions that don’t seem to faze or confuse ordinary civilians and seasoned criminals exhibit unusual levels of naivete. Megaton really makes use of location shooting, using Istanbul’s numerous back streets and wide roads to make the perfect back-drop to the mass of explosions that inevitably follow Bryan on his mission to save his family. With a tried and tested approach to action, Taken 2 might not be clever but it is big. Audiences won’t warm to this in the same way that they did to Taken but it has enough of its predecessor’s residual sparkle to ensure it will fare well at the box-office.

Shun Li and the Poet