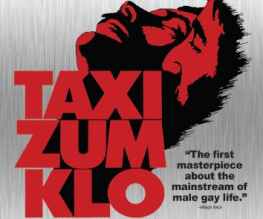 Taxi Zum Klo, which translates as ‘Taxi to the Toilet’, is directed by, written by and stars Frank Ripploh as Frank Ripploh, a teacher with a very active gay sex life in 1980s Berlin. This semi-autobiographical film created what you might call a ‘stir’ on its release, being hailed by many as ground-breaking and by US customs as something that was not getting into their country. Released in 1982, it is a film that was light-years ahead of its time; even now it is hard to imagine Hollywood financing such a project. We are introduced to the two contrary halves of Frank’s life which, he stresses, he keeps entirely separate. By day he is a respectable if quirky primary school teacher and by night he cruises public toilets and saunas, picking up men for casual encounters. After some time he meets Bernd, played by Bernd Broaderup, and they become lovers. The audience is treated to brief vignettes of their time together, from the amusing – Frank peeing a heart in the snow for his lover – to the touchingly domestic. However, Frank rapidly becomes bored with this sedentary lifestyle and again takes to cruising Berlin’s streets. As he drives around the city at night, his voiceover explains; he loves Bernd but is restless.

Bernd is unhappy about Frank’s rekindled sexual activity, but when he asks for fidelity Frank dismisses the idea impatiently, suggesting that Bernd also go out and “enjoy himself”. Bernd doesn’t, but remains with the promiscuous Frank, who becomes increasingly irritated by his partner’s attentiveness and traditional values. “I want to come and go as I please,” he complains, railing against the lack of variety in their relationship and their sex life. “Either I am too forward or he is too coy,” his voiceover says. Taxi Zum Klo’s notoriety most obviously comes from the graphic sex scenes, as Ripploh spares his audience no detail. In fact, to paraphrase Brecht (not something I get to do very often), the audience might as well hang their imaginations up in the cloakroom, since there’s no need to use them. But perhaps what Hollywood would object to even more is the pure realism of these sex scenes. It is easy to imagine some exec coming over all faint. “But what happened to the AIRBRUSHING??” I can hear him cry.

The film is scattered with humorous moments; a scene of Frank taking tea at his colleague’s house is intercut with memories of his latest sadomasochistic sexual encounter. The contrast of the mundane with the sexually perverse is repeated through the film, to lovely comedic effect. Regardless of its sexual extremes, Taxi Zum Klo has an inescapable innocence. Set in the pre-AIDs era, condoms are, to a modern audience, conspicuous in their absence, and a doctor’s visit is based on Frank’s vague worry about STDs, a scene which later films would layer with more menace. This film, revelling in sex for sex’s sake, could not be made in our post-AIDS era, lacking as it does judgement or penalty. That is perhaps the real controversy of the film: Frank is allowed to do what he wants with no consequences. As a post-AIDS audience, we cannot help our faint sense of foreboding at Frank’s freewheeling existence. This is reinforced by wintry Berlin, gritty and tinged with melancholy, which our protagonist seems to drift through unaffected.

Despite Taxi Zum Klo’s graphic sex, it is essentially a contemplation on relationships and the difficulty of finding someone who wants the same things that you do. As Frank in the final scene considers whether to salvage his relationship with Bernd, his voiceover asks: “Can we do anything other than simply repeat ourselves?” The same question asked by warring couples the world over.

Taxi Zum Klo is to be re-released on April 22nd

Previous: DOOM to get ‘reboot’
Next: Top 10 awful things film posters do to the English language