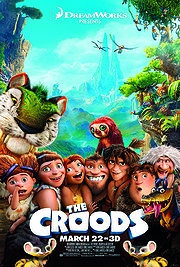 Over the past thirteen years, DreamWorks Animation has proven both a worthy and welcome addition to the field of animated cinema.  True, their output may not always meet the consistency of Pixar’s, but it has certainly had its stand-outs, with films such as Shrek, How to Train Your Dragon and Rise of the Guardians illustrating not only the studio’s skill as animators, but also an ability to convey some of life’s most important lessons. Leading with the core message that “it’s what’s inside that counts”, they’ve used their films to denounce the fear of others, promote equality and teach children that they should never give up hope.  So, what sensible and affirming message does The Croods add to this legacy of faith and good will? “Jump on the sun and ride it to tomorrow!” It’s difficult not to be disappointed.

Centring on the story of a prehistoric adolescent and her family, the titular Croods, the film follows Eep (Stone) as she strives to break away from the routine life that her father Grug (Cage) insists upon and that her mother Ugga (Keener), brother Thunk (Duke), and Gran (Leachman) readily accept. With the story beginning in the awkward fashion in which it means to go on, Eep’s early narration seems to show odd self-awareness, introducing the group as “cavemen” as if she somehow already knows that history will lead to an alternative.  Initially suggesting that our protagonist may be narrating to us from beyond the grave, this develops into a plot point when she meets Guy (Reynolds), a more evolved human who has attained knowledge not only of fire, but also of an impending apocalypse heading toward the area. 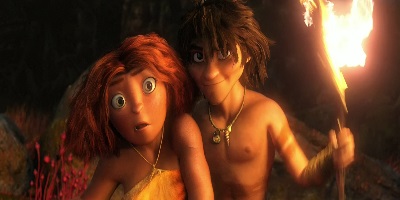 Yet despite the adventurous Eep soon becoming eager to join Guy in the search for safer ground, Grug’s instinctive fear of anything new quickly leads to friction.  Whilst he preaches that the only sensible way to live life is to stick to what you know, Guy’s message of invention and discovery soon begins to attract the family, leading them out of their cave and into a world of brightly coloured nonsense.  Indeed, as the Croods explore their new surroundings, we soon discover that prehistoric Earth looked something like James Cameron’s Pandora, a neon jungle where bizarre creatures roamed free and men were robust enough to plummet hundreds of feet at a time with no fear of injury.  With even Eep’s appearance proving distractingly odd – the limbs of a teenage gymnast coming together with the curves of an adult woman and the face of a Cabbage Patch doll – everything about the film’s design seems just a little bit wrong. 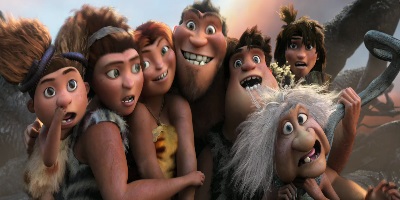 Aesthetics aside, however, the biggest disappointment about The Croods is the writing.  Had it been handled well, such a plot could have evoked sources as intelligent as Plato’s Allegory of the Cave, instead we barely even get a cheap gag about how Grug has literally been “living in a cave” before we find ourselves knee-deep in tired tropes and meaningless slogans.  With jokes that riff on killing your mother-in-law, how much women like shoes and slapstick that Wile E. Coyote would be proud of, the duty of saving the film falls solely on the strength of its central message, which – unfortunately – is where this review began.  Given the relatively easy task of coming up with a moral for their story, writer-directors Chris Sanders and Kirk De Micco must have felt spoilt for choice. “Don’t stop exploring”, “never be afraid to try new things”, “every person has their strengths”. What did they settle for? “Jump on the sun and ride it tomorrow!” Please, DreamWorks, you’re better than this.

Previous: Love Is All You Need
Next: Cheat Sheet: Harmony Korine