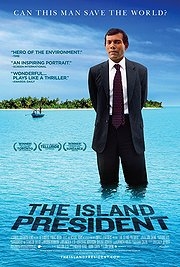 Jon Shenk’s latest documentary, The Island President, charts the story of Mohamed Nasheed, the President of the Maldives. Having suffered torture, repeated imprisonment and solitary confinement for his opposition to authoritarian leader President Maumoon Abdul Gayoom, Nasheed finally brought democracy to his home country in 2008 and took on the role of President at the age of 41. Though he may have thought his darkest days were over it soon became apparent that they were only just beginning, as the real threat of climate change loomed over his low-lying island nation. The reality for the Maldives is this: with a sea level rise of just 3 metres the Maldives’ 1200 islands will become a modern-day Atlantis, submerged beneath the surface of the ocean with 3,000 years of history, culture and people lost.


The movie tracks President Nasheed’s first year in office, from his official appointment to the Copenhagen Climate Summit in 2009. Nasheed is a fantastic character. He is funny, delightful, cheeky and outrageously determined to get the recognition, help and cooperation that his nation needs to survive. Ultimately, he’s one politician you’re rooting for; maybe it’s because he’s the underdog, maybe it’s because he was beaten up so many times but often it’s just because he is honest, brave and has moral integrity. Jon Shenk is, however, the unseen star of the movie. His cinematography set to the dulcet (if slightly gloomy) tones of Radiohead portrays the Maldives as a mythical nation, so beautiful it almost transcends itself. And that’s the point: the eeriness, the glowing blue water and tiny dotted islands are soon to become a thing of stories if the ocean is allowed to claim it over the next few decades. The golden sands and iconic exotic beach holiday images are tainted by the sandbags and diggers placed on the islands’ coastlines in a futile attempt to keep the waves at bay. It’s a harrowing reminder of the ease with which man can fall and of the grim fact that the next generation of Maldivian children could become the first environmental refugees, forced to leave their homeland

But it’s not all doom and gloom. Nasheed lifts your spirits with his warm humour and unrelenting will to solve the problem of climate change with the help of his practical team of people. Though the Copenhagen Climate Summit was seen by many as a failure, thanks to a rousing speech from Nasheed himself it was salvaged from complete disaster with an agreement that marked the first time that the United States, China and India had collectively agreed to reduce carbon emissions. The section of the film documenting the Summit is a rare glimpse into the realities of the political bickering that goes on behind closed doors. Nasheed is like the small kid with glasses (probably called Englebert) thrown amongst the big bullies, struggling to be taken seriously and ending up a little bruised when he attempts to speak up. But Nasheed has been bruised before; his appreciation for his democratic rights is enough for him to square up even to the Chinese in order to save his nation. The message of Shenk’s documentary remains a serious one but its real triumph is that it’s not preachy. For those of us who live blissfully and ignorantly with the idea that recycling now and then is enough to save the planet, it does not set out to wag its finger nor badger us into a change of behaviour.  Instead it simply and poignantly brings home the realities of impending climate disaster, in stark, vivid terms.

You don’t have to live in the Maldives to appreciate that losing your entire culture, your houses, your cinemas, your favourite park bench, is a terrible thing. Think of the uproar if Nelson’s column went under and we’d all have to up-sticks to Ben Nevis? This is the immediacy of the problem for a nation that’s already had its fair share of trials and tribulations to bear. Now, despite being led by a man who’s won numerous political and environmental awards for his work, it faces an even tougher and less forgiving adversary in the form of climate change. The Island President is not trying to change your mind, but it will. In any case, for the beautiful cinematography, the inspirational Nasheed and for a crash course on the little known history of the Maldives, this documentary is well worth a watch.

Previous: Kristen Stewart features in first On The Road trailer
Next: Switch