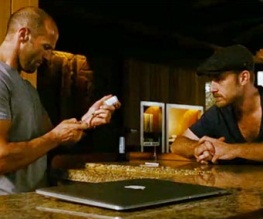 Though The Mechanic is a reworked version of the 1972 movie that starred king of the hard-nuts, Charles Bronson, don’t put your classic film hat on just yet. The original was bad, and so, mostly, is this. Jason Statham continues his reign as a meaty meathead in the main role of Arthur Bishop, an assassin paid by an anonymous organization to kill, well, whoever’s on his list. He is managing to pull this off with a suspicious lack of difficulty, using his spare time to listen to Schubert and tinker with his Jag, when who should turn up on the to-do list?

Only his mentor and ex-colleague, Harry McKenna (Sutherland). The moral dilemma of whether to kill his father figure takes about three seconds, and then another pesky obstacle turns up, as they are warrant to do in this type of thing, in the form of straggly disappointment Steve (Foster), Harry’s son. Despite showing no signs of empathy in previous scenes, Arthur decides to take the convicted girlfriend-basher under his wing, showing him how to pull off a clean kill whilst working a turtleneck.

Jason Statham effectively plays Jason Statham in every role, and this one is no different. Bald of head, hard of face, one suspects he is not an actor at all but an actual hit man, hired to bring authenticity to the Transporter and Crank franchises. Perhaps knowing his past CV, director Simon West wisely decides to keep his dialogue down to a minimum. He nods, he looks left and right, and he grinds on call girls – and that’s all we need! Meanwhile, Ben Foster is so good he makes you want to run to IMDB to find out what he’s done before. The only thing I recognized is crappy teen comedy (and adaptation of Twelfth Night) Get Over It, in which he plays a geekish guy with a crush on Kirsten Dunst. The difference here is astounding. The chilling intent with which he plays his part forces Statham to raise his game, resulting in a touching partnership between a scrappy young upstart and seasoned professional. Quotes from the ’72 movie, good as they may be (“Murder is only killing without a license”, “You always have to be dead sure. Dead sure – or dead”) cannot match up to the epic-ness of one line in the 2011 version:

“I’m gonna put a price on your head that’s so high, when you look in the mirror you’re gonna want to kill yourself.”

The film is full of these sort of extravagant statements – I swear to god, if one more person walks away from an explosion without looking back, I’m going to throw a shit fit – and whilst they make the film funnier, they do nothing for its believability. When people are invested in someone dying, it usually means that other people are invested in them living, which makes it absurd that Steve can brutally and messily complete his first job without any signs of consequence; he may as well have left a business card at the scene. Statham plays completely into his stereotype in this reworked assassin thriller, but a mesmerizing performance by Ben Foster is worth the ticket price.