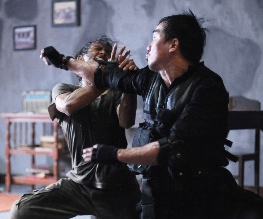 There’s a scene in The Raid, right, in the thick of the claustrophobic horror of it all, where it looks like an easy kill has been lined up. The good guy’s on the floor, the baddie’s got the gun – by all accounts, it’s over. But after beckoning the helpless fellow into a dank, mildewed room, our pistol-toting madman puts down his weapon and tells his opponent that he finds that method of execution too easy. “It’s like ordering take-out”, he explains. He wants to fight, fist to fist, blow by excruciating blow, so that when death comes, he’ll have earnt it. Considering the utter passion, talent and vision seeping from every one of The Raid‘s unrelenting action sequences, it’s the one scene where it feels like director/writer Gareth Evans is talking directly to his audience. So, the set-up is simple. One building. 15 floors. A bad drug-lord type guy at the top of it and a lot of violent tenants along the way – such is the briefing given to the Indonesian police team bundled into the SWAT vehicle in the film’s opening, and our introduction to the action. It’s a briefing made all the more troublesome by the scarceness of its details – why are they going? Who is their back-up? OK, so they need to take down this bad dude, but why? And who exactly are these orders coming from? Director Edwards picks and chooses the questions he feels deserve answering, deciding to slice off any real exposition in favour of lean dialogue and a premise that requires no real character development or complicated narrative. Our hero is Rama (Iko Uwais) a husband and soon to be father who’s been worrying about this assignment for weeks, and – in an interesting twist hinted at fairly early on – not just because of the brutality they are bound to face. Upon entering the compound he and his team are hit by an onslaught of bullets from the residents within – an uncompromising, emotionless attack – and those who are lucky enough to actually make it into the building soon learn that they are trapped there. It seems that the only way out is up. The problem is, they’re on floor one, and it’s a hell of a long way to the top. Of course, action flicks centred around one location are nothing new – from Die Hard to Assault on Precinct 13 , the idea of a siege localised in one place is a familiar one. But the claustrophobia, the feeling of ever-enclosing darkness and of the desperation of the endgame that Edwards imbues into every frame of The Raid pushes the film from action into full blown horror: the damp, peeling walls of the corridors making each scene look like a stylised, Carpenter-esque Silent Hill . As our characters are rapidly whittled down first by gunfire, then by a variety of pointy objects and finally by limbs alone, we cannot help but feel engulfed by the setting – the endless rows of closed, blank apartment doors only heightening the fact that screams of the dying raises no reaction in the people living behind them. Of course, a film that hangs its tale entirely on pure, indulgent violence can really only be judged on its fight sequences – and what glorious sequences they are. From heart-thumping multi-floor attacks where machine-guns roar from behind greasy stairwells to one-on-one Pencak Silat combat sequences where every throat slice is captured in glorious, greedy detail, Edwards builds his action absolutely masterfully, effortlessly showcasing the immense talent of both his choreographer and his cast. Mike Shinoda’s brain-blasting soundtrack complements every kick, every moment of impact and every excruciating pause; creating a buzzing, hellish and inescapable backdrop to the relentless, beautiful massacre.

The Raid won’t be for everyone. The simplicity of its concept means that those hankering for the originality of the work of Chan-wook Park or Takashi Miike may be disappointed, those who are used to a more fleshed-out narrative or character arc may feel short-changed and those used to the pulp-action of Tarantino may wish for more in lolz and less in people being shot directly in the eye. But these are quibbles. The Raid beats flabby Western action to a bloody, glorious pulp and manages to look elegant, ruthless and extremely toned whilst doing it. Bring on the sequel; I can’t think of many more dilapidated, maniac-infested hell-buildings I’d rather charge back into.