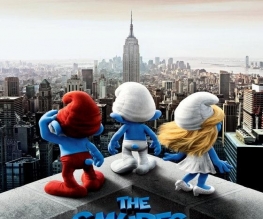 To be completely fair to team Smurfs – vortexes look quite good in 3D. There are two vortexes in The Smurfs 3D, and both of them are quite good. Kids always love the swirly-whirly uppy-downy characters, grown-ups appreciate the heightened perspective (and the swirly-whirly uppy-downy characters) and though it doesn’t really serve any purpose other than that of instant visual gratification, it doesn’t really matter. Instant gratification is the name of the game in Smurf-topia, and from the moment a hastily explained rip appears in the time/smurf continuum (get used to it), you know how the next hour and a half is going to go.

So, Papa Smurf, Smurfette, and some other smurfs whose names are, confusingly, character traits rather than just the word “smurf” are being chased by dastardly villain Gargamel through the lush greenery of their home. In their efforts to escape they find themselves trapped handily next to a swirling vortex, and, one leap through a CGI plot-hole later, they’re in Noo York City. More specifically, in the lap of advertising executive Patrick (Neil Patrick Harris) and pregnant wife Soft Spoken Woman From Glee (Soft Spoken Woman From Glee). The smurfs want to get home, but can’t do it unless they find a couple of items that will take about an hour and a half to find, and Patrick doesn’t have any time to help – he has to come up with a new ad campaign for scary boss (Sofía Vergara). If he doesn’t come through, he’s gonna get fired, and THE LAST thing he needs is total responsibility over a group of mythically-ambiguous, washing-machine-friendly cartoon characters. But when Gargamel (Hank Azaria) arrives on the scene determined to, like, kill them or something – not kill them, sort of, harness their powers to…maybe, anyway SMURF SMURF SMURF, Patrick and wife have to help their new pals get back home before it’s too smurf. This is essentially a lazily-plotted kids flick saved by some excellent casting – both Neil Patrick Harris and Jayma Mays are veterns at tongue-in-cheek earnestness and manage to just about strike a happy balance between heart-warming innocence and arch self-awareness as they ‘surprise-face’ their way through their respective blue-blooded journeys. Hank Azaria is on another level entirely as the panto-style villain Gargamel as he gurns and wise-cracks his way through the 3D streets of NY like an gleeful marionette, limbs flailing and teeth gnashing. His scenes are by far the funniest – total commitment to the ridiculous role means that he gets away with just about everything, and his natural charisma and comic timing raises what could have been a desperately cringeworthy role into easily the best thing on the screen. But how do the titular characters themselves fare? Not brilliantly, sadly. With six Smurfs to focus on at any one time we never really focus on any of them, and an attempt at a storyline around Clumsy (a sort of smurfy under-dog) Becoming All He Can Be falls by the wayside in favour of a slightly clunky message about Patrick Becoming A Good Father. Not a particularly resonant moral for the under 8s. It simply doesn’t have the easy one-size-fits-all ethos that Dreamworks and Pixar cracked years ago, and by desperately trying to appeal to those new to the Smurf world as well as nodding knowingly at those who grew up with it, the film lacks a solid heart. Either you have faith in your characters, or you take the mick out of them – doing both and hoping you’ve covered both sides just feels like cheating. There’s certainly nothing to hate about The Smurfs 3D, but sadly no-one on screen (save Azaria) invests enough to make you – or your kids – smurf a crap. Wait…

Previous: Orange(Wednesday)s and Lemons #32
Next: Eddie Murphy’s back in the voiceover booth for Hong Kong Phooey