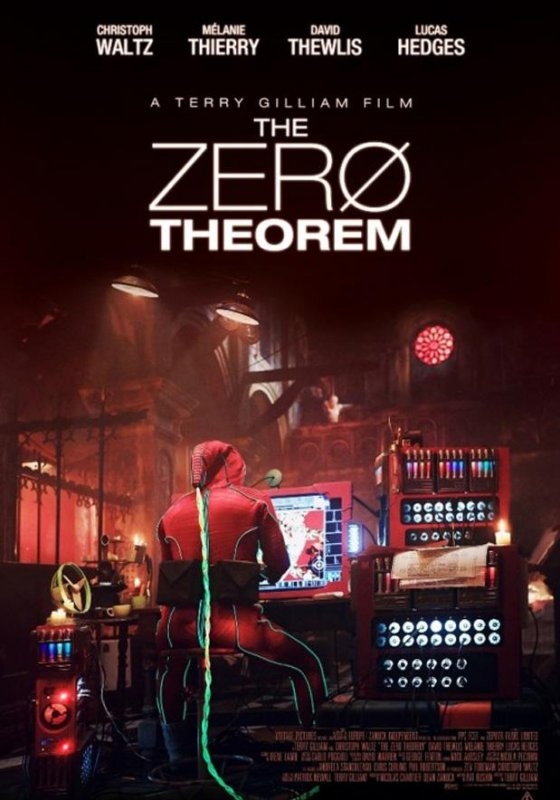 Reclusive computer genius Qohen Leth (Christoph Waltz) is waiting for a phone call. He doesn’t know when the call will come or who the caller might be, but he expects it to relate somehow to the meaning of life. Unfortunately, Leth has to spend a considerable amount of time at work, where he pours over various formulas under the watchful eye of Management (Matt Damon). While at a party, he is told by supervisor Joby (David Thewlis) that Management wants to put him on a new project, and accepts when it is revealed that he can perform his new duties from home. Qohen has been tasked with solving The Zero Theorem, a mathematical extrapolation of Big Crunch theory which seems to suggest that life is purposeless. Leth needs his phone call now more than ever, but with the sudden arrival of Bainsley (Mélanie Thierry) and Bob (Lucas Hedges) in his life he keeps finding himself getting distracted from his work.

You should of course know better than to apply logic to a Terry Gilliam movie; the auteur doesn’t plot his movies in the usual sense, rather he develop his themes until they themselves assume some sort of narrative shape. Watching a Gilliam production is often akin to an episode of Doctor Who; it’s a overwhelming, alienating experience in which you have to write the contrivances and improbabilities off to something vaguely timey-wimey and just savour the experience in all of its crackpot, nonsense glory. After all, it’s not every director who could overcome the untimely death of his lead actor by recasting not once but three times, as he did with last film The Imaginarium Of Doctor Parnassus. Why? Even having watched the film the answers aren’t exactly forthcoming.

Of all Gilliam’s past films, it is perhaps 1985′s Brazil that is the most obvious forerunner to The Zero Theorem (no surprise really, as it’s being billed as the third and final part in the director’s ‘Dystopian Satire Trilogy’). It’s yet another tale of one man’s persecution by the state, only rather than the straight man being up against a force of complete and utter chaos the roles have this time been reversed. This time it’s the protagonist who babbles incoherently to the endless bewilderment of those around him; Leth is an eyebrow-deprived recluse who inhabits a fire-damaged chapel, refers to himself in the first-person plural and has turned a simple wrong number or prank call into a bona fide belief system.

There are shades of Gilliam-esque satire to the world inhabited by Leth, a culture that would invoke Dr. Seuss and Whoville if it wasn’t so technologically advanced or strangely sexualised. As a treatise on religion and the madness of blind faith The Zero Theorem is mildly successful, though in order to reach its eventual conclusions you must suffer through an awful lot of largely inconsequential silliness. Who’s to say whether Waltz — or for that matter any of the cast — are hitting their marks, for it is singularly impossible to imagine what exactly they might be aiming for. Waltz spends a lot of time acting frenzied at a computer, but to what effect it is difficult to say. Thierry and Hedges seem to hold some answers, but never enough to completely satisfy, while Tilda Swinton only adds to the insanity as a Scottish psychiatrist.

The Zero Theorem will likely appeal to those well-versed in the director’s style and sensibilities, and to anyone willing to analyse and scrutinise every utterance or incidence for hidden, if not misplaced meaning. For everyone else it is likely to prove even more obtuse, enigmatic and indecipherable than Gilliam’s other works. You have to be in the mood to watch The Zero Theorem, and it’s safe to say that I wasn’t. Honestly, the titular formula itself must have been easier to crack.

Previous: Need for Speed
Next: Captain America takes on Batman and Superman