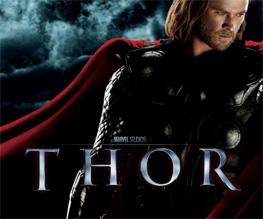 Of the various superhero films which are being rushed out before The Avengers hits, kicks, lasers, hammers and otherwise demolishes cinema screens next year, Thor might well be the most eagerly anticipated; and with good reason. It stars a near-unknown alongside a cast of Oscar-winners and rising stars, and boasts no less a personage than Shakespearean veteran Kenneth Branagh in the captain’s seat. And it’s, you know, about a Norse alien with a hammer designed for the express purpose of bringing the motherfucking ruckus. I think what I’m trying to say is that Thor was never going to be boring.

Right, how’s your Norse mythology? You’ve probably got a vague idea – Valhalla, Jotunheim, all that jazz – but what you probably didn’t know is that the inhabitants of Asgard are actually technologically advanced aliens whose timely appearances in pre-Christian Scandiwegia led to them being worshipped as gods. Asgardian king Odin (Hopkins) and his warriors keep the peace between the Nine Realms (which include Earth) – a peace that has lasted for centuries, and would have endured even longer had Odin’s arrogant son and heir, Thor (Hemsworth), not had the poor sense to listen to his sneaky brother Loki (Hiddleston) and go on an extremely undiplomatic Frost Giant-battering mission.

Odin’s monoptic rage knows no bounds and he banishes Thor to Midgard (that’s Earth, FYI), having first stripped him of his almighty hammer Mjolnir and thereby his godlike powers. Thor plummets down the Bifröst, the rainbow bridge which connects the worlds – and falls into the New Mexico desert right in front of Jane Foster (Portman), a scientist who has been tracking the hitherto inexplicable energy surges which turn out to be caused by the Bifröst itself. Thor explains his background with the help of Jane’s conveniently Swedish colleague Erik (Stellan Skarsgård), but it’s all devilishly hard to prove without his trusty hammer (which has been impounded by secretive government agency S.H.I.E.L.D.). Fortunately, nothing says “No, I’m genuinely that Thor” like a heavenly war spilling out into Midgard. Hold onto your beards, this shit’s about to get mythical… There’s an awful lot to like about Thor. It’s conveniently filled with stock characters who interact and develop precisely as we expect them to, leaving our entire brains free to appreciate the sheer bloody majesty of the film’s visuals – one senses that, freed at last from Shakespeare’s relatively pedestrian stage directions, Kenneth Branagh just decided to go absolutely mental. The CGI spires of Asgard are reminiscent of new-trilogy Coruscant at its most gleaming and ostentatious, whilst the rainbow bridge which Thor et al use to traverse the Nine Realms is irresistibly reminiscent of a light-up floor in a 70s disco. When he’s not squandering the FX budget Branagh handles the huge, sprawling story with panache, managing to make the obligatory forty-five minute presentation from the Department of Backstory feel relatively fluid, and only really loses his way in the increasingly inexplicable final act. He’s helped on his way by a reasonable if not stellar cast – Chris Hemsworth is an appropriately butch and twattish Thor, but his arrogance-to-humility transformation is as hammy as Anthony Hopkins’ entire, ridiculous performance – one suspects that Hopkins just doesn’t give a shit now, he’s just happy to be roaring in a cyber eyepatch. Natalie Portman is utterly underwhelming as the giggling and distinctly unscientific Jane, although Skarsgård’s small role as her colleague/father figure is an unexpected treat. The stand-out performance, however, is from Tom Hiddleston (Archipelago) as the greasily conniving trickster Loki – his return in The Avengers will be something to look forward to.

Possibly what Odin was thinking of when he first conceived the idea of the perfect Bank Holiday film, Thor the movie is much like Thor the character – it’s big, uncomplicated, overdressed and probably not going to keep your attention if you let it ramble on, but my God it’s good to look at. Enjoy.