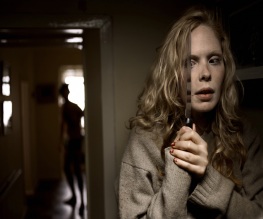 Blooded ‘documents’ the harrowing events allegedly survived by a group of five young deer hunters on a hunt in the Highlands of Scotland in October, 2005. The political climate of the United Kingdom is dangerously volatile in the wake of the Hunting Act of 2004, which banned fox-hunting in both England and Wales, and one member of the hunting party in Scotland happens to be the most outspoken voice against the ban – Lucas Bell (Ashdon), who is at this point the youngest Huntmaster in England. In an attempt to silence Bell’s publicised opinions, an extremist animal rights action group, calling themselves the Real Animal League, kidnaps the five, strips them, and leaves each stranded in different locations across the hills, setting them as ‘prey’ for other hunters. What follows is the race to survive, and the struggle to hold on to what matters most – belief.

One would expect such a widespread and prickly point of contention as the hunting debate to be dealt with using at least a semblance of prudent realism, but such is not the case in Blooded. Rather, the mockumentary is unquestionably a superb exercise in bungled guerrilla-style filmmaking; it presents fictional events as though real, using faux interviews, doctored internet footage, and a smorgasbord of misleading phrases that would have the viewer believe that the film is a legitimate exercise in cinéma vérité. But the events of October 2005 never really happened, and the “Real Animal League” never existed, and shortly after the cameras start rolling along romanticized woodland scenes and the highly-affected ‘interviews’ get going, it becomes evident that Blooded is little more than a trumped-up pseudo-thriller, flogging the back of controversy in order to dredge up publicity. And yet despite this obvious pretence, it is impossible not to judge this film on the basis of its pretend-commentary on extremism because a) that is what Blooded has professed to do and b) it is so utterly confounding that one simply cannot ignore it. It would also be easy to say that there is not one grain of truth to the storyline of Blooded, but that would mean a failure to acknowledge the very real, misappropriated context in which the entire plot is embedded. The film handles an acutely sensitive point in British culture in an offhand, careless manner and the contrived, stereotyped narrative does neither side of the argument justice. The mock-footage of Lucas Bell is a ridiculous amalgam of the pro-hunter trotting around his manor, grandly gesticulating like some Tudor king, bemoaning his spurned love in an bathetic show of sentimentalism, and playing the martyr in a torture scene a la Al Qaeda, in which the anti-hunting activists are devolved into little more than balaclava’d, armed militants. Blooded masquerades as an open exposition of the idea of extremism, aiming to open the floor to healthy debate; but it’s far from a balanced view on the subject – just a poorly presented and very obviously biased one – unintentionally or otherwise. At best, the story comes across as an insipid melodrama, and at worst, a classist piece of propaganda. The tepid, sudsy human drama is swallowed up by the storm of the real-world controversy, and any authentic attempt at political or social commentary loses face because of the frivolous soap opera playing alongside it. Either way, the question as to whether the hunting/ extremist debate is the overarching message of Blooded or merely the poorly chosen vehicle for a plot is a moot one; the film is unsuccessful on both counts and would do better to market itself as a primitive experiment in antagonism and anaesthesia.