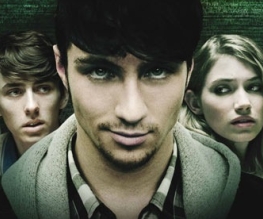 Mo (Daniel Kaluuya) is a genuinely lovely boy, but he’s head over heels for his best friend’s eleven year old sister. Emily (Hannah Murray) is a middle class miss who would quite like her parents to hug her instead of paying for deportment lessons. Eva (good old Imogen Poots) is a posh model who’s sick of the empty vacuity of her peer group. Jim (Matthew Beard) is a shy loner whose dad left him in London Zoo when he was seven, never to return.

These four teens meet in an online chatroom set up by William (Aaron Johnson), a charismatic young artist and hacker who wants his new friends to achieve more than they’d ever thought possible. And William? Well, he’s the embittered son of a (fictional) famous children’s writer. Fearful of taking his life, he inspires others to commit suicide, and watches on his laptop as they make their final ‘sod you, world’ gesture..

Chatroom‘s director Hideo Nakata (Dark Water, Ringu 2) is best-known for slick, morbidly terrifying productions with an atmospheric asian slant. Jarringly, Chatroom (funded by the UK Film Council) is by no means the assured suspenseful horror one might expect. Nakata seems a bit of a fish out of water when filming a bunch of limeys in London. The themes of alienation, suicide and society thinly papering over the cracks might actually have been better portrayed – by Nakata, at least – in a stylised japanese environment than in the food stalls of Camden Town.

As an adaptation of a play of the same name, Chatroom‘s original staged format occasionally creeps through. The actors pleasingly have their moments but the grand conceit of the virtual chatroom – a giant crumbling hotel with various surreal rooms – remains, while freshly handled, just that – a conceit.

And what of the social comment? Don’t expect it to match up to films like The Social Network in terms of being a statement on our life and times. It’s not even a horror suspense as the choice of director would suggest. At the end of the day, Chatroom is really quite enjoyably silly. I’m glad it’s certificate 15. That means the people who need to see it most will be able to get into the cinema without slathering on loads of lipstick and wearing shoes with really high soles.

Chatroom is a quirky little fable, a bit of popcorn fun, and an emo urban fairytale. People who like Camden Town and enjoyed The Hole will secretly love this.

Let’s leave it on a high note: At the end of the day, any suspense thriller which ends with a showdown, a laptop, a gun and a bunch of penguins at London Zoo can’t be all bad.

Previous: Apatow to reprise Pete and Debbie from Knocked Up
Next: De Niro to preside over Cannes jury