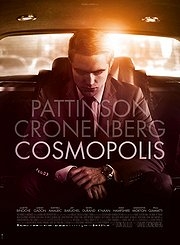 Eric Packer (Pattinson) wants a haircut. He could get one in his office, or across the street, or in his ridiculously swag limousine (we find out that he can do a lot in there as things progress – piss, get a prostate exam, shag Juliette Binoche etc.). Nonetheless, he’s adamant that he must travel across town on what proves to be a particularly congested day in New York: there are rioting anarchists, the funeral procession of a dead rapper, a rumoured threat to the visiting president’s life and a ‘credible’ threat to Packer’s… As the soundproofed limo crawls towards its destination, the world’s youngest multi-billionaire deconstructs, both figuratively and – by betting against the rise of the yuan using patterns found in nature – literally, his fortune and the life he has built for himself. You were all lied to, you know. The sexed-up trailer for Cosmopolis, which promised sex, guns and gunsex, consisted of exactly all the action in the film, misleadingly packaged. That naked chick with the gun? It’s a Taser, and she doesn’t even fire it. You can hardly blame the marketing team, though. This is the most defiantly non-commercial film of the year, a deliberately alienating, glacially paced art film that’s wall-to-wall dialogue – and wilfully obtuse dialogue at that. It’s important to establish right now that if you aren’t absolutely committed to a 110 minute brain teaser (and who could blame you?), you really aren’t going to engage with this one.

But if you’re a fan of words, delivery and composition there’s a lot to enjoy here. Numerous comparisons to Pinter have been thrown about, and although the style here is a little more naturalistic the comparison does hold some weight. The dialogue is often abstract and stylised (though always with a purpose), and alludes to events and characters rather than laying them out explicitly. Exposition is at an absolute minimum, limited to informing characters of information they couldn’t possibly know. As such, Cosmopolis becomes a puzzle. The fun is in deciphering the point of a sentence, the manner of its delivery and whether or not we can trust it. In other words, working out what’s actually going on is sort of the point. The success of Cronenberg’s adaptation doesn’t end there, and it’s great to see a director trying to use the medium to enhance and emphasise the ideas of the novel. Any shot that doesn’t actually contain Packer is in some way shot through an alienation device – for example, we only ever see the riot through the limousine’s windows – which, coupled with the complete absence of ambient noise and the high production value, really compounds the distance he has put between himself and the world around him. As events progress and this world breaks down, so too does the look of the film, the set dressing, and the barrier, both physical and metaphorical, that separates Packer from the common man.

There are some smart editing decisions too. The rapper’s funeral, the only instance in which Packer allows himself to express unchecked emotion, is trimmed from an unnecessarily rambling scene in the novel to make its one important point: the first breakdown of Packer’s cool veneer is caused by the death of the man who sang his elevator music. Then there’s the delivery of violence: brutal and abrupt in a manner that recalls Scorsese, but only when it’s relevant to Packer. Otherwise, such as when a man who has set himself alight in the lotus position is comically dismissed as unoriginal, it is intentionally shot to be incidental. Will it bother you as much as a man simply shooting through his own hand? Doubt it, and that’s entirely the point. Of course, a movie like this lives and dies by its leading man, and its impossible to deny that Cronenberg took an enormous risk casting Robert Pattinson after Colin Farrell was forced to pull out. It was a brave move for both, and, happily, The Artist Formerly Known As R-Pattz is nothing short of a revelation. His Packer is a powerhouse of depth and nuance, a man who’s only ever saying a fraction of what he’s thinking, who’s recognisably simmering with dissatisfaction and curiosity without ever letting it spill over. Even more remarkable is the confidence of a young, relatively inexperienced performer sparring with some of the very best actors in the game and effortlessly holding his own.

And this supporting cast is intimidatingly accomplished. Juliette Binoche is utterly glorious, making great use of the limo set and bristling with a coquettish, post-coital purr. Paul Giamatti is brilliantly twitchy as a man at the end of his tether, a far more believable counterpart to Kiefer Sutherland’s role in Phone Booth. Matthieu Amalric (whose film Heartbeat Detector would make an interesting companion piece to Cosmopolis) absolutely slays his cameo, his manic energy and stream-of-consciousness delivery putting him perfectly at odds with Packer. Samantha Morton’s patchy accent is a weak link (especially up against Pattinson’s, which is flawless), but her hazy finance-guru is a fascinating creation, all blank stares and subtly shifting attention. Cosmopolis is probably not for you. And even if it is today, it might not be tomorrow. But give it the attention it deserves – honestly, I’d even recommend giving the fairly short novel a skim first – and you may well find a lot to enjoy, regardless of whether Cronenberg wants you to or not.

Previous: Dark Horse
Next: Charlie Sheen to become President of the United States