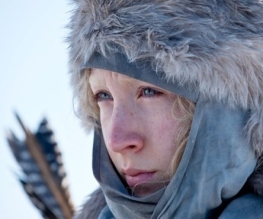 Trained to kill by day, and quizzed multi-lingually from an encyclopaedia by night, Hanna (Saoirse Ronan) is being trained up as an assassin by her father deep within the Finnish tundra. Captured soon after she and Erik Heller (Eric Bana) decide to separate, Hanna is reunited with Marissa Wiegler, a corrupt CIA agent (Cate Blanchett) whose history is inextricably tied to that of the Hellers. Escaping from what turns out to be an underground installation in Morocco and left stranded in the desert, Hanna befriends a family of British tourists who give her a quick induction in relative normality. Soon tracked down by a mercenary named Isaacs (Tom Hollander), however, Hanna must complete her mission to rendevouz with Erik at a derelict Brothers Grimm amusement park in Berlin.

There aren’t many sixteen year-old actors who could convince as a hardened super-solider, reared from birth to be the ultimate assassin, and who would have thought that Saoirse Ronan – the softly spoken star of The Lovely Bones – would be the hit-girl director Joe Wright was looking for? Ronan nevertheless creates a compellingly calm centre to this storm of whimsy. Required to front about five films at once, Hanna is as much a coming-of-age Bildungsroman as it is a Bourne-esque actioner; Ronan grows from an emotionless, reindeer slaughtering factoid into an empathetic and surprisingly sweet young woman with complete conviction, not entirely without the help of first ever friend and teenage powerhouse Sophie (Jessica Barden).

Eric Bana and Cate Blanchett provide ample support as the loyal father and wicked witch respectively, with Blanchett in particular chewing scenes as the psychopathic dental hygienist who will stop at nothing to tie up every remaining loose end. It’s a role that demands tremendous diversity, and Blanchett fares substantially better with the abrasiveness of the required Texan droll than she did with her Ukrainian wubble-yous in Indiana Jones and the Temple of the Crystal Skull. It is Hollander, if anyone, who provides the film’s weak link, unfathomably cast as a turquoise shell-suited henchman with badly dyed blonde hair. Camping it up to dizzying heights, Isaacs really must be seen to be believed, and not necessarily in a good way. A welcome departure for Wright, Hanna drops the director’s staple costume dramas (and the sentimentalism from his last film, The Soloist), and reimagines the humble fairy tale as a high-octane, high casualty conspiracy thriller. While character is often ascribed to sets or direction, Alwin H. Kuchler’s cinematography really does give a performance of its own, the stunning camera-work giving scenes a terrific fluidity, adding an extra layer of polish over the accomplished performances and spectacular set design. The score too, provided by The Chemical Brothers, conspires to create an electric, relentlessly engaging whole that both huffs and puffs Amanda Seyfried’s Red Riding Hood out of the picture.

That said, Hanna is not without its flaws. With the more outlandish references jarring creakily with the sporadic realism of the action scenes, you can almost hear the film-makers patting themselves on the back at how clever and deep they’ve been. If Hanna is a contemporary fairytale – complete with provincial heroine and big, bad wolf – it is a morality tale lacking in moral. Overcomplicating the story with various narrative mods and cons, but failing to pay lip-service to the various thematic innovations (when it comes to Hanna’s back-story the audience are more or less left to work it out for themselves), Hanna occasionally feels a few drafts short of completion. While the character may have the rest of her life to figure out what she is, the film itself sadly runs out of time.

With the amount of effort the script expends on referencing Grimm’s fairytales, then, it is difficult to criticise Hanna on behalf of narrative ambiguities or scatterbrained plotting. Whimsically brutal and strangely sweet, the film is a wonderfully dignified and intriguingly incomplete faerie story which boasts an outstanding performance from Ronin. Short, sharp and scored to perfection, you will unlikely see anything else like it this year.