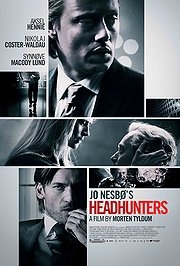 The latest critically acclaimed Scandinavian thriller to sail into the sights of the Hollywood remake battleship (sorry, we’ve got them on the brain) is Headhunters, Morten Tyldum’s high-octane take on Jo Nesbø’s wildly popular novel. But is this just another Stieg-alike snow’n’guns’n’giant sweaters venture? Well, no. Not really. Our protagonist and occasional narrator, Roger Brown (Hennie), is not a confident man. Married to tall and glamorous art gallery manager Diana (Lund), he consistently worries that his short stature and nice-but-not-amazing looks will never be enough to sustain the relationship. However, what Diana doesn’t know is that art pays for the couple’s lifestyle in more ways than one. A high-end recruitment officer by trade, Roger is also a deft professional thief, subtly probing interviewees for information about their private collections before breaking into their homes and slipping the goods off to the black market. So when Diana introduces him to Clas (Game of Thrones’ Coster-Waldau), the former CEO of a Dutch GPS company in town bidding for a new job, Roger wastes no time in making his assessment. Chiselled and charming, Clas is just the sort of man Roger fears his wife could leave him for – and he also claims to have an original Rubens sitting in his house.

Yet what starts out as a heist movie quickly escalates when we learn that, before going into business, Clas originally used his technology expertise to lead a Special Forces unit specialising in the pursuit and capture of fugitives. Soon the pair are entwined in a deadly cat and mouse game that finds our protagonist in pretty deep shit. And that isn’t necessarily a metaphor. If you’ve ever glanced the cover of a Jo Nesbø novel, chances are you’ve seen a particular review quote emblazoned across the front. “THE NEXT STIEG LARSSON”, is the bold proclamation, clearly demonstrating the eagerness of Mr. Nesbø’s publishers to pull in some of the millions familiar with Larsson’s hugely successful Millennium Trilogy. You can hardly blame them. With Millennium having produced three bestselling novels, a trio of highly popular Swedish films, and one well-received American adaptation, who wouldn’t want a slice? Indeed, with Headhunters the novel proving an international hit and the film having scored the second best opening weekend in Norwegian history, it would seem Nesbø is well on the way to matching up with his Swedish neighbour.

But did the author ever even have such intentions? If the home-grown screen version of Headhunters is a reliable source to go by – probably not. Though Nesbø has welcomed comparisons of projected success, he has been quick to assert a belief that he and Larsson are “quite different writers”, identifying his work more closely with that of American crime authors. Watching Headhunters it seems appropriate. What unfolds here isn’t a brooding exploration of a grim Scandinavian underbelly, but instead a story of two morally void characters caught in a deadly chase to gain or retain wealth. Echoing off-beat Coen thrillers such as Fargo and No Country For Old Men, the film is violent, but also bleakly funny, with a definite transatlantic appeal. Directed with a slick polish and edited with swift and precise flair, the film often succeeds in racking up the tension and, during the theft scenes, the tapping drums of the score only add to this unease, perfectly encapsulating Roger’s fear at any rattle of a key or noise of traffic outside. The more grim comedic notes also hit the mark (it’s not often you get to see a man make his escape on a tractor with a dog skewered on the front), though suspension of disbelief does begin to waver a little as Clas’ methods become more and more extreme. Thank goodness then for the film’s very un-Coen ending montage. Reining matters back in and wrapping things up wonderfully, it serves as the perfect reminder that though Headhunters may be lacking in realist social commentary, it more than makes up for it in fun.

Previous: Avengers Assemble featurette is more of the bloody same
Next: Orange(Wednesday)s and Lemons #65