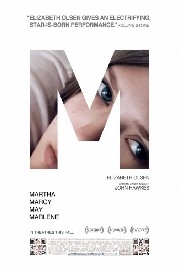 At first glance, Martha Marcy May Marlene could have been put together from instructions in the Boys’ Own Book of Psychological Thrillers – take one unstable and paranoid protagonist, add a pervasive sense of unease which infiltrates even supposedly tranquil situations, season with HORRIBLE HORRIBLE FLASHBACKS and garnish with John Hawkes in a dirty vest. However, writer-director Sean Durkin’s first feature film is much more than the sum of its parts. Atmospheric, unnerving and tied together by an endlessly compelling central performance, Martha Marcy May Marlene may just be the sleeper hit of this year’s BFI London Film Festival.

Lucy (Paulson) has it made. She’s got the high-flying husband, the luxurious lake house and a family of her own to start, and it looks like everything’s coming up roses… that is, until she suddenly receives a phone call from her sister Martha (Olsen), who has been missing presumed shacked up with someone inappropriate for the past two years. Martha arrives at Ted (Hugh Dancy) and Lucy’s house in a fragile emotional state, refusing to discuss her past and exhibiting strange behaviour including apparently total ignorance of the concept of privacy. Wherever she’s been – and her curt assertion that she was living with a boy who eventually done her wrong doesn’t quite ring true – it was a very odd place.

In fact, it was more than odd; as a series of flashbacks and dreams reveal, Martha’s home before fleeing to Lucy’s house was a secretive cult-like community in the Catskill Mountains. Initially seduced by the share-and-share-alike ethos of the group, she went on to be rather more literally seduced by its intimidating leader Patrick (Hawkes), who renamed her Marcy May. Plagued by memories of her time at the camp and terrified that her former friends might catch up with her, Martha’s behaviour begins to drive a wedge between her and Lucy, for whom ‘talking one’s crazy sister down from the ledge’ is not a high priority. She may have escaped the commune, but Martha can’t cast off the shadow of Marcy May – at least for as long as she’s still in her head… Martha Marcy May Marlene seems determined to leave questions unanswered. That’s fine in some contexts – the deliberately ambiguous ending is a beautifully-executed case in point – but I can’t help but feel that the moments of carefully crafted confusion are outnumbered by elements which simply weren’t properly wrapped up. Where on earth are the rest of Martha and Lucy’s family, and why are they literally never mentioned once? Why doesn’t Lucy make more than a token effort to find out where on earth her only sister has been for two years? And even if they didn’t wear them in the cult, would it have killed someone to buy Martha a bra? I can’t fault the script (or most things; the soundtrack was a particular delight, whilst the film’s limited, rural setting is used to spectacular effect), but a little more tying-up of loose threads would have been very welcome.

That said, a performance like Elizabeth Olsen’s makes up for all manner of ills. The younger sister of the rather more famous Twins belies her age and inexperience with her breathtaking interpretation of Martha, a damaged and possibly deluded young woman whose mood swings and fragmented psyche must have taken enormous effort and skill to recreate. Don’t be surprised if she follows Jennifer Lawrence’s example and picks up a Best Actress nomination in February; I simply can’t remember a more assured debut. She’s helped on her way by a fine supporting cast; Laura Paulson and Hugh Dancy make a decent fist of deliberately anodyne supporting roles, but the other stand-out performance is John Hawkes’s whispering, terrifying Patrick. Hawkes also picked up an Oscar nomination for Winter’s Bone, but his charismatic and manipulative role here is a million miles from his meth-addled lone wolf Teardrop. Sean Durkin, whose current CV boasts a handful of producer credits as well as two short films, is not nearly as good a film-maker now as he could be. That said, plenty of directors (hello, Michael Winner) couldn’t touch Martha Marcy May Marlene even at the height of their careers. It’s just as well we’ve got two eyes each; from now on, I’ll expect you to keep one each on Sean Durkin and Elizabeth Olsen. They’re going places, and Martha Marcy May Marlene is the perfect springboard to get them there.

Previous: Details of Zoolander 2 revealed
Next: Orange(Wednesday)s And Lemons #39