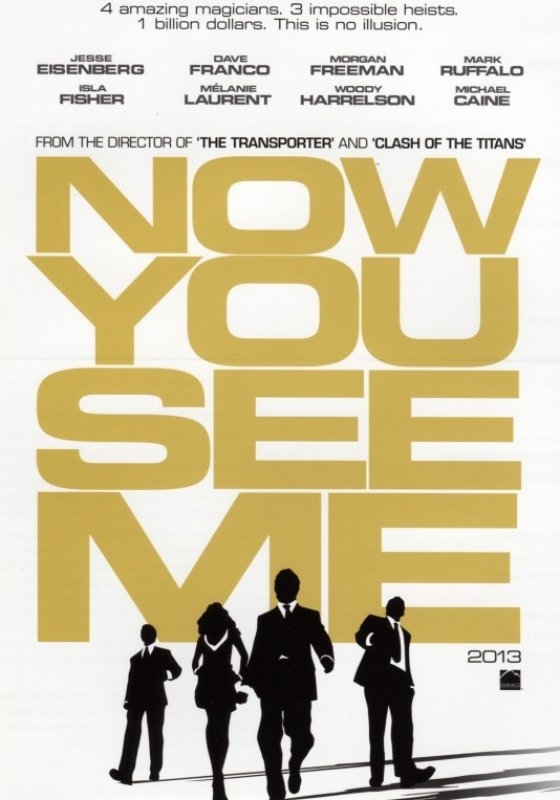 A year after they were each contacted by a mystery benefactor, four gifted magicians – J. Daniel Atlas (Jesse Eisenberg), Henley Reeves (Isla Fisher), Jack Wilder (Dave Franco) and Merritt McKinney (Woody Harrelson) — take to Las Vegas as The Four Horsemen. During their first show, the performers invite a member of the audience onto the stage and, robbing a bank of the man’s choosing, shower their audience in stolen Euros. Having attracted the attention of FBI agent Dylan Rhodes (Mark Ruffalo) and Interpol’s Alma Dray (Mélanie Laurent), the Horsemen evade arrest while trying to impress The Eye — an elite faction of magicians — with one final trick.

Widely dismissed as “The Prestige For Dummies”, Now You See Me was always going to suffer in comparison with Christopher Nolan’s own exploration of magic and the men who devote their lives to it. It didn’t help that director Louis Leterrier cast Nolan regulars Morgan Freeman and Michael Caine in supporting roles — as ex-magician Thaddeus Bradley and sponsor Arthur Tressler respectively — leading to accusations that the thesps looked bored by the apparently lesser material. (To the contrary: I’d say this is the most fun Freeman has had all year.)

Such criticisms are rubbish, of course, for while Now You See Me may lack the philosophical or intellectual underpinnings of The Prestige it does something entirely different, but equally important: it entertains. Leterrier’s film, quite unlike previous efforts Clash or Wrath Of The Titans, is both thrilling and funny. The opening act in particular is paced just right as each character is introduced in turn, their individual specialties — Henley is an escapologist; Merritt is a mentalist — helping to stave off repetition as they each show themselves to be masters of their own fields. Once brought together, their inter-relationships and rivalries keep them interesting.

But Now You See Me is very much an ensemble piece, and the fact that the script spends as much time as it does focusing on Ruffalo, Freeman and Caine helps it to explore its world of magic in a much more rounded way. Ruffalo’s partnership with Laurent is nicely played, while the ever-changing relationship between Freeman and Caine is sparky and, in the end, oddly satisfying. As such it is often difficult to choose a side in the conflict, but at the same time it’s refreshing to not have the film’s own sense of morality defined from the outset.

Without the need for realism or credibility, Leterrier gleefully makes his illusions as big and complicated as possible. An opening card trick and a later scene involving a disappearing rabbit are still mystifying in their relative simplicity, but for the most part the film’s magic is heavily reliant on leaps of logic and special effects. It isn’t all limited to stages, for once, and one of the film’s most memorable displays takes place in the midst of a fight scene; as Dave Franco’s con artist flees the FBI, he finds himself up against Ruffalo’s agents, utilising various tricks of the trade to aid his escape.

Ultimately, however, it is the final reveal that will colour your perception of the movie. Deemed ridiculous, impossible and patronising by some, the denouement does admittedly require quite a suspension of disbelief — so it’s a good thing the film is about magic. Call me naive, gullible or easily pleased, but I genuinely did not see the twist coming, nor was I at all disappointed with the angle the filmmakers inevitably took. Now You See Me may lack prestige, but the pay off is just the same.

Previous: The Internship
Next: Bula Quo!