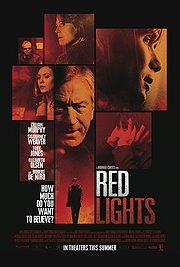 How writer-director Rodrigo Cortés went from last year’s focused, inventive thriller Buried to this piece of bizarre, hammy nonsense is quite beyond me. In fact, Red Lights is almost exactly the opposite of his last venture – expansive and directionless in contrast to Buried‘s controlled minimalist execution. Perhaps the utter failure of Red Lights on almost every level is indicative of a filmmaker who has got too big for his boots. Or maybe Cortés is just only good at films set in boxes. Red Lights focuses on paranormal investigators Tom Buckley (Murphy) and Margaret Matheson (Weaver), who make a living out of debunking so-called psychics and faith healers. Matheson, who lectures on the subject as a university professor, has been doing this for years and – as we quickly find out – her obsession is all tied up in the tragic fate of her only child, who has lain in a coma for over twenty years. You know, that ol’ chestnut.

When Matheson is disturbed by the re-emergence of famed psychic and healer Simon Silver (De Niro) – who disappeared from the public eye years ago following the mysterious death of his biggest naysayer – Buckley’s interest is piqued. Before long, Buckley is having a relationship with one of Matheson’s nubile young students (Elizabeth Olsen) and insisting – god knows why it’s so important – that he and Matheson investigate Silver and prove he’s a fraud. Only everyone is warning him to stay away. “You don’t know what you’re getting yourself into Buckley!”. All that kinda shit. Oh and Robert De Niro is blind. The odd thing about this film is that, despite its shiny cast and fairly expensive look, the whole thing seems a little cheap. It almost has the feel of a hokey made-for-TV movie that stumbled onto the set of a psychological thriller and thought “What the hell!”. Everywhere there are nonsense things going on. A glassy-eyed Sigourney Weaver talking about the day her son became ill – “He was playing and then he just fell over” (real moment); Robert De Niro having some kind of office with a special red curtain and an old man outside who screams for no reason; Cillian Murphy being incredibly emotional all the time despite the fact that there’s hardly anything going on.

Perhaps the most irritating thing about Red Lights, though, is that it is set in some sort of parallel universe in which mediums and psychics are all the rage, and not just naff Las Vegas sideshows. In the world of this film, Sigourney Weaver’s character goes onto a talkshow and is given a dressing down by THREE experts for dismissing Silver’s abilities. In fact, psychics are so popular that Toby Jones (playing a professor of some sort) has a whole university department dedicated to proving the existence of the paranormal. Only – despite this apparently being the twenty first century – when said department carries out a series of recorded tests of Silver, the footage is actually grainy, like something out of the 1950s. What have they filmed this on? Where are the Handycams in this parallel universe? The sad thing is that you can see the cast physically straining to make sense of it all despite the fact that, for everyone involved, getting through Cortés’s dreary, on-the-nose, exposition-filled script must have been like chewing through a day old gammon sandwich. Going to the most effort is Murphy, whose evident desperation to make his character work results in him stomping about all the time wailing and threatening people and getting beaten up.

The most that you could say for Red Lights is that it features some stylish shots and moody lighting, alongside a central idea that probably once, long-ago in the dark recesses of Cortés’s brain, resembled a story that made some sense. But all-in-all, this is a boring, frustrating, pointless film that delivers an ending essentially going against every promise it sets up. For a film called Red Lights, Cortés’s latest is really rather dim.