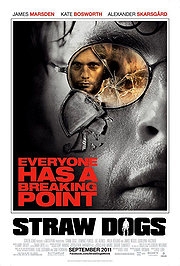 Ugh. Why? Why has Rod Lurie done this? What’s the point? I just don’t get it, Rod! The new Straw Dogs reduces Peckinpah’s rapey classic to a bog standard thriller, carbon-copying from the original where it doesn’t matter, and departing where it does.

Screenwriter David Sumner (Marsden) and his wife Amy (Bosworth) move from LA to Amy’s hometown of Blackwater, Mississippi so David can have a bit of peace and quiet to finish his current screenplay (yeah good luck with that, Dave). Following a hurricane, the roof of their barn has been badly damaged and David ends up hiring Amy’s ex Charlie (Skarsgård) and his cronies to fix it. Tensions mount between David and Charlie and before long they are locked in a power struggle which threatens to turn violent. SPOILERS: It does. From the off, it’s clear that this film is keen to make itself at least somewhat distinct from its source material. It’s set, for instance, in Mississippi rather than Cornwall; it features deer hunting instead of duck shooting. And, of course, the real game-changer is that our protagonist David Sumner is a screenwriter as opposed to a mathematician. “What??!! But that makes it a completely different film?!!” Obviously, no one thinks that. And for the most part, Lurie’s film is almost completely the same as Peckinpah’s.

In one of the opening scenes we are introduced to Tom (James Woods), an ageing drunk with a violent temper. Asked to leave the diner where he is drinking, Tom responds by forcing the barman’s hand down on a beer glass. He then shoulders his way behind the bar and gets himself a drink. THIS IS EXACTLY HOW IT GOES IN THE ORIGINAL. I mean, EXACTLY. Which would be fine if Lurie was making a shot-for-shot remake à la Gus Van Sant’s Psycho. But he’s not. And the thing is, where the remake does depart from its source material, it is to dispense with the subtlety and complexity of Peckinpah’s film. One of the worst examples of this occurs when David explains in detail the ancient Chinese ritual of “straw dogs” (Title! Title! That’s the bloody title!) to Amy – who in real life would have been like, “WTF are you talking about David?”. At this moment even Marsden, who does his best with the role, seems distinctly uncomfortable. I can’t help feeling Lurie was standing just off camera holding up an autocue and mouthing “READ IT. READ IT”.

The new film also dumbs down the relationship between David and Amy, which – in the original – is where a lot of the tension derives from. Susan George’s Amy was immature and flirtatious, clashing with David when he refused to attend to her. And Dustin Hoffman’s David had more of a temper about him, more of a sense of underlying machismo and anger. The fault, though, doesn’t lie with the actors but with the script, which dispenses with the ugliness of the original in favour of something slightly less offensive. The famous rape scene is made less ambiguous and Bosworth is not seen topless as George was in the original. But elsewhere Lurie ups the shock factor by showing nails going into hands and broken bones poking out of arms (more like Rod LURID, am I right?), as if that’s the point of this story. Fundamentally, it feels like Lurie read the script and thought “NO ONE WILL UNDERSTAND THIS. WHY IS IT CALLED STRAW DOGS. MY HEAD HURTS.”

If I had never heard of the original, I would probably have been able to sit through this film thinking it was OK. Marsden and Bosworth are both good actors, and there are a couple of tense moments. But when held up to Peckinpah’s film, it’s hard to understand why Lurie bothered at all.