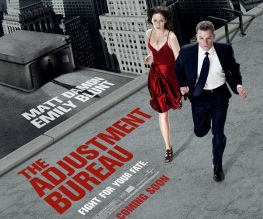 The Adjustment Bureau stars Matt Damon as young, ambitious and eminently likable New York politician David Norris. Norris, after failing to win an election, meets a mysterious, beautiful young English dancer named Elise (Blunt) in the gentlemen’s loo of the Waldorf hotel (no really). They hit it off but are separated by circumstance, namely she is a wedding crasher on the run from the hotel security, and he is required to give a humbling speech to his disappointed supporters.

The following morning sees the entry of a goofy troupe of fedora wearing celestial bureaucrats led by Richardson (John Slattery of Mad Men fame) and Harry Mitchell (Anthony Mackie) whose job it is to subtly interfere with (read: adjust) events in the world in order to make sure their mysterious ‘plan’ goes to, err, plan. Disaster immediately befalls their operation, however, as Harry, who has been working on David’s ‘case’ for many years, fails to subtly influence David’s fate when it is required of him. This causes David to unwittingly go ‘off-plan’. He boards an earlier bus resulting in a chance reunion with Elise, they re-hit it off and this time he gets her number before parting ways with her once again.

Later when he arrives at work, again earlier than expected, he interrupts another ‘adjustment’ in process. This ‘adjustment’ is less subtle than the first (it involves lasers) and thus reveals to David the clandestine operations of ‘The Adjustment Bureau’. After fleeing in terror David is accosted by Richardson and his goons and warned that he must not reveal their existence, nor pursue Elise, the latter being explicitly forbidden by the ‘plan’ on account of it having catastrophic consequences.

David is determined to be reunited with Elise, and the Adjustment Bureau is determined to keep them apart. It’s the classic tale of forbidden love, albeit realised through the less than conventional philosophical apparatus of fate and determinism! The stage is set for a gripping inter-reality cat and mouse chase! Or rather not. The Adjustment Bureau falls quite flat as a thriller and the reason is markedly simpler than the elaborate set-up: it lacks a true antagonist. For a thriller to be thrilling there needs to be a believable threat of violence or danger, and the threats uttered by the Bureau aren’t really believable because from the start we are let in on the fact that they aren’t really the bad guys. They are a quite benign, rather likeable bunch who, despite the great power and responsibility they are endowed with, can be characterised by their bumbling incompetence (which caused the whole scenario in the first place) more than anything. This fundamental flaw makes the ensuing pursuit a somewhat stultified and neutered affair.

The introduction of veteran Bureau agent Thompson AKA ‘The Hammer’ (Terence Stamp) promises to inject a bit of urgency into proceedings. Unfortunately Stamp seems to have based his performance on some sort of camp Bond villain, rather than developing an understated menace that the role, or rather the whole film, was crying out for. It’s a bit of a shame because the lead performances can’t really be faulted. Damon is typically on form and perfectly suited to his role and Blunt’s character is actually quite likable, despite at times threatening to become a wacky, eccentric English stereotype. What’s more the dialogue between the two of them comes across as not only believable but natural – all the more impressive considering the relatively short amount of screen time they are given together.

Overall Nolfi has produced a smart script and got some great performances from his cast but all this is deflated by the lack urgency inherent in the plot. It’s telling that Philip K. Dick’s short story ends roughly where The Adjustment Bureau picks up. Dick’s conclusion simply isn’t the suitable premise for a feature-length thriller.