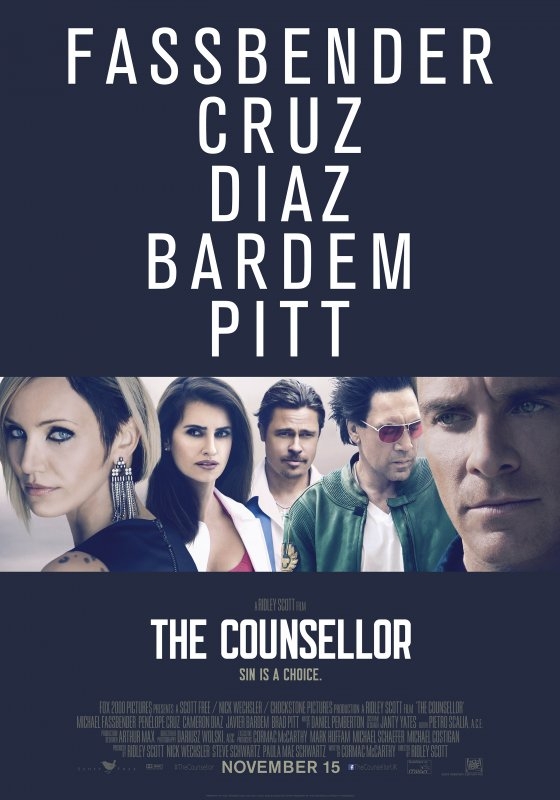 After years of pitting his luckless protagonists against gladiators, Saracens, cannibals, jihadis, aliens, Incas, replicants and even more aliens, a scattering of Mexican gangsters feels like a pretty low-key threat for Ridley Scott’s latest. And so it proves. With characters ranging from the forgettable to the insufferable and a plot that makes even less sense than Kingdom of Heaven, The Counselor is a vapid, confused and poorly constructed mess that can’t help but leave you with the suspicion that Ridley’s happier dealing with men in armour. When you’ve got men in armour, you don’t have to care what they’re thinking.

In Mexico, or the very south bit of America, or something, a nameless lawyer (Michael Fassbender) (I hate nameless characters) and his irritatingly pious girlfriend (Penelope Cruz) are rolling around licking each other and being offensively happy. Nameless Lawyer (I’m not calling him The Counselor, it’s like free advertising) pops to Amsterdam to buy a gaudy engagement diamond from, of all people, Bruno Ganz, and then heads off to a house party courtesy of obviously crooked ‘businessman’ Reiner (Javier Bardem), a floral-shirted nightmare of a man with hair like Gareth Gates’ pubis, two pet leopards and Cameron Diaz looking hella skanky. “Hey Nameless, why don’t you do more risky drug deals?” says Reiner. Nameless looks pensive.

LATER THAT DAY, or whatever, Nameless meets Brad Pitt to talk drug deals. “If you’re involved in a drug deal that goes wrong, the cartels will be all sorts of tetchy,” warns Brad Pitt. “That’s okay,” says Nameless, and goes off to get some legal aid woman’s son off a speeding fine. He’s so public-spirited! We sure hope the son isn’t a drug courier with the key to all the drugs in his helmet, because if he was and his head got cut off somehow then the cartels would probably blame Nameless and then it might all get messy. Sorry, hang on – someone’s phoning in some plot on the other line. The courier’s head just got cut off? Oh, nuts.

It should be literally impossible for the combined talents of Michael Fassbender, Javier Bardem, Cormac McCarthy and Ridley Scott, plus Brad and the birds, to produce a film this bad, but somehow they managed it. From the unnecessarily symbolic virginal whiteness of the first scene onwards, The Counselor is a film with nothing to say and loads of ideas about how to say it – Nameless displays such coruscating idiocy that it’s impossible to believe he was so successful to start with, whilst the other characters revolve around him like badly painted animals on a carousel powered by disappointment and crap writing. McCarthy’s success as an author is all very well, but nobody says anything in The Road – The Counselor’s dialogue is impossibly clumsy, with huge chunks of exposition thrown in wholesale and the caricatured Mexican villains sounding about as threatening as El Nombre.

Fassbender does a reasonable job of trying to save his nonsensical character, whilst Penelope Cruz is totally wasted as his one-dimensional tart and Javier Bardem just twats about offering mad advice like a Hispanic Yoda. Brad Pitt is actually quite fun, which obviously means that he only gets ten minutes of screen time, and Cameron Diaz continues to be as utterly, utterly awful as she’s been for her whole festering career. Diaz reportedly had to redub her part after inexplicably filming the whole thing in a Rihanna-style Barbadian accent; I wish they’d left it in, since her relentlessly useless performance was the film’s only constant.

With writing so heavy-handed that there’s no room for drama, a pace so humdrum that the action scenes just come as an unpleasant shock and direction so predictable, uninspired and lacklustre that it’s almost impossible to believe the same brain produced Blade Runner and Alien, The Counselor is a salutary lesson for anyone who assumes – as I did – that throwing enough brilliant names into the mix guarantees you a watchable film. Everyone involved (bar Diaz, obviously) must know they’ve let themselves down – hopefully that, rather than its damning critical reception, will spur the stars of The Counselor back to better things.

Previous: BFI: Gothic
Next: Blue Is the Warmest Colour