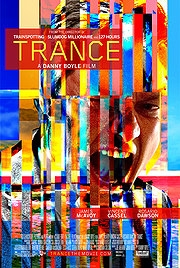 Danny Boyle sure likes hammering things heavily: Trance is about a man who gets put in a trance and, with its blurry visuals and persistent cutting between dream and reality, it also aims to put the viewer in a trance. Danny got a theme and he ran with it… but his exploration of the subconscious could do with being a little less self-conscious.

If you like the idea of watching a classic Danny Boyle film while high on a large dose of hallucinogenics, then you’ll love Trance. It’s got Boyle written all over it; his trademark manic energy, seamless merging of the real and the unreal, non-linear narrative and a combination of scary tension matched with a silly sort of fun are all there for the play. But Boyle’s characteristic directorial style seems to have gone into overload, with his usually enjoyable assault of music and colour becoming too exaggerated and intrusive, adding confusion to an already overambitious plot. The result is, to say the least, head spinning.

Trance has a promising opening, beginning with a witty and totally gripping heist sequence. This is well executed, intercutting between the soft Scottish tones and sparkly eyes of art expert Simon (James McAvoy), calmly explaining the official auction procedure during a break-in (“Take the most expensive item. Hide it. But don’t be a hero. No painting is worth a human life”), an excited crowd bidding millions for Goya’s eerie painting Witches in the Air and some masked criminals with big guns preparing to storm in and steal it. The tension builds, the speed quickens until: “SOLD! FOR 27 MILLION!!” then there’s smoke bombs, smashing stuff up and lots of hysterical screaming. Amidst the chaos Simon follows procedure with the words “don’t be a hero” echoing in his head – but, alas! a hero he (kind of) is. Gang leader Franck (Vincent Cassel) nicks the Goya off Simon so Simon gives him a good tazer to the back of the neck. Unfortunately Franck responds by hitting him. Really hard. On the head. Leaving him unconscious in a worryingly large pool of blood. 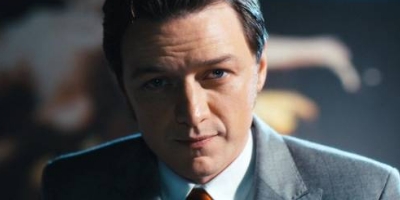 After a complicated looking brain operation Simon returns home, finds his house has been torn apart and then, as if his day wasn’t bad enough, is swiftly kidnapped and tortured. Turns out actually Simon cut the Goya out of the frame and hid it before the thieves could get to it – only now he has amnesia and can’t remember for the literal life of him where he put it. At the end of his tether, Franck decides to stick to what he’s good at and sets about breaking into Simon’s brain to steal the valuable memory. This is where sexy, sultry hypnotherapist, Elizabeth (Rosario Dawson) comes in. Elizabeth puts Simon in a trance so that his subconscious can give them the answer – and things go from a bit weird to completely absurd. Reality and imagination become one. The mystery thickens, then thins, then thickens again. Then there’s twists within plot holes and plot holes within twists and traditional concepts of logic and plausibility disappear from the world as we know it. 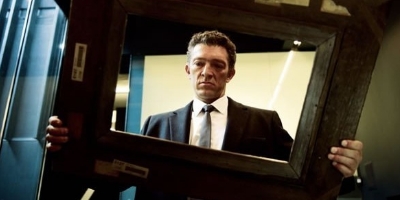 One of the more successful aspects of Trance is Boyle’s use of light and colour which gives everything a strangely false appearance.  Franck’s apartment is bathed in blocks of neon coloured light, making it feel tacky and artificial, whereas Elizabeth’s office, with its coordinated furniture and stark cleanliness, has a sheen of catalogue perfection which makes it seem like it doesn’t belong in the real world. However when this fake crispness is paired with Boyle’s continuous depiction of technology (Simon always sees his memories depicted on an iPad), the film often looks like one big Apple advert. 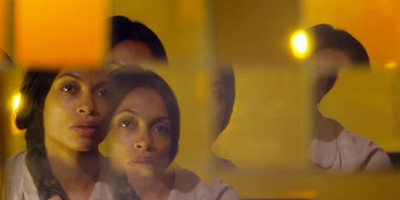 James McAvoy shows off his notable acting talent as the naive, innocent art expert at the beginning. However when he transforms (vague spoiler alert!) into someone far more disturbing, his character quickly loses his believability. Rosario Dawson holds it together when everyone else is hamming it up, but her character is also a tad confused. Everythign feels a little too unbelievable – and there’s no denying that the continuous twists would work better if the film itself didn’t come across as disingenuous as the characters. It’s also worth considering Boyle’s clichéd Hollywood representation of the subconscious here to; I recognised the blue sky and fluffy clouds from Vanilla Sky, the convertible driving along sun drenched idyllic country roads from The Virgin Suicides and the continual, snappy change of locations/constant “waking up and it’s all a dream… or is it?!” from Eternal Sunshine of the Spotless Mind. Nothing feels origianl and, as a result, the film loses bucketloads of credibility. 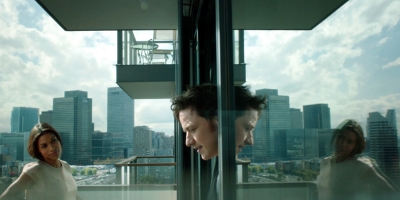 See, I told you Trance was a toughy. It’s definitely not Danny Boyle’s best movie to date, but it’s still worth a watch. Maybe you should go and see if you can muster any more sense out of it than I did…