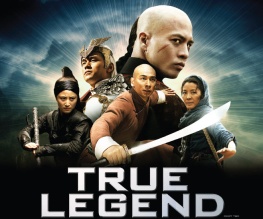 True Legend, which hits UK screens on the 24th of September, marks Yuen Woo-ping’s return to the director’s chair after fourteen years concentrating on the martial arts choreography for which he is justly famous (he’s picking up a Lifetime Achievement Award at next week’s Fantastic Fest – well done him). Replete with inexplicable plot twists and stultifying dialogue, this film demonstrates precisely why he should have stuck to planning the punchy dance bits, but he continues to create such balletic and fascinating fight scenes that we can forgive him almost any other sin. You will leave True Legend with very little idea about the mythical origins of the Drunken Fist style of Wushu, which is arguably what the film’s about, but you’ll be so excited by the superhuman exploits of its protagonists that you’ll probably break a knuckle punching lampposts on the way home.

The year is 1861, and General Su Can (Who can? Su Can!) is the pride of the Imperial army. However, he retires from active service and passes on his reward of a province to govern to his step-brother Yuan, preferring to devote his life to his young family and the practice of Wushu. Fast-forward five years and Su is about to open his own Wushu academy when Yuan, who has gone all pale and evil, rocks up and decapitates his dad. It transpires that Yuan and Ying (his sister/Su’s wife) were adopted because Su’s dad killed their dad for going a bit mental with a naughty Wushu power-up called Five Venom Fists. It sounds dangerous, doesn’t it? And indeed it is.

Su is nearly killed and only escapes Yuan’s clutches through the intervention of Ying, who leaves their child Little Feng with his murderous uncle (questionable decision, that) in order to nurse Su back to health in secret. His discipline and self-confidence abandoned, Su becomes a hopeless drunkard – only to start regaining his powers through training with the God of Wushu, who beats him up on a daily basis. Is the God of Wushu real or a hallucination? Could Su’s son get any more irritating, or is he maxed out? Should I be offended by pale skin being associated with evil? As True Legend‘s multi-chaptered and variably paced story unfolds over two long hours, you will realise that you don’t care at all.

Plot-wise, True Legend really is spectacularly bad. The entire tone changes halfway through when Su goes mad and becomes a drunken and neglectful father, which is quite a big character shift to fling into the mix with no warning but what amounts to an animated test card with ‘Warning: filthy beggar ahead’ on it. The English subtitles are insane and detract from some of the more heartfelt scenes – Su’s last happy day with his family is ruined by the oddly translated line “Ying, even now you are a mother you are so rambunctious!”, and the insistence on referring to Su’s son as ‘Little Feng’ throughout gets incredibly tiresome. Two awkwardly inserted 3D scenes add to the confusion as the audience scrambles for their glasses only to find they’ve fallen in the popcorn, then leave them on too long and get a headache. That said, the actors are broadly fine (if a little melodramatic), and there’s a welcome cameo from Michelle Yeoh as the herbalist who shelters Su and Ying.

The thing is, if you go to see True Legend it categorically won’t be for the story. Yuen Woo-ping, let us not forget, choreographed the entire Matrix series as well as Crouching Tiger, Hidden Dragon, Kill Bill Vol. 1 & 2, Kung Fu Hustle and innumerable other spectacular films, and as a successor to these visual feasts True Legend can hold its head high. Like its inebriated protagonist, it is extraordinary to watch but not necessarily appropriate for introduction to any sophisticated friends.