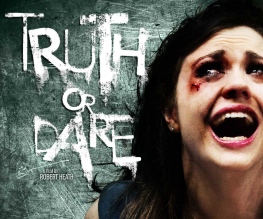 When was the last time you played a game like Truth or Dare or Spin the Bottle? Never hopefully because they are tedious games with zero pay off and once played you will never again be considered cool. In Truth and Dare we are presented with a group of uber hip, coke-snorting trendies who are the toast of every party because they play games that are dull even by an eight year old’s standards. And that is meant to be the most believable part. Even with a massive injections of death, sex and boobs Truth or Dare fails to make the transition from schlock to shock. What ever happened to good British horrors like The Wicker Man?

The story begins at a happening party for young students. The drink and drugs are flowing, everyone has really shiny hair and the girls are all total slappers so it looks set to be a good night. Nerdy millionaire Felix (Kane) is trying to get up the courage to tell Gemma (Hall) that he fancies her but can’t find his nerve – but after taking a few lines of coke from small-time drug dealer Luke (Vlahos), he tells Gemma the truth. Although she is nice to him about it, Gemma shoots him down and says that she is with Chris (Gordon). Later that night brunette tart Eleanor suggests a game of truth or dare which everyone joins in with. During the game, Felix embarrasses himself and incurs the wrath of evil boyfriend Chris, who punches him in the face. Lovely.

One year later, the gang of friends are invited to Felix’s birthday party at his parents’ mansion in the country. When they arrive they are told to walk through the woods to the hunter’s cabin where the party is taking place. They are greeted by Justin, Felix’s ex-army brother who says that Felix isn’t coming. The gang decide to stay and party anyway but soon things turn nasty when Justin reveals that actually Felix committed suicide after the previous year’s truth or dare fiasco. Soon the friends find themselves held hostage by a psychopath with a love of party games and they begin to turn on each other in an attempt to survive the night. 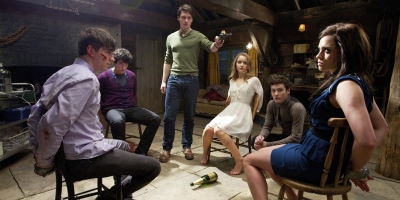 The makers of this film have clearly been inspired by gorenography classics like Saw and Hostel – however, both of those films were genuinely sick and scary whilst Truth or Dare is the most tedious torture session imaginable. Even after being tied to chairs and watching one of their number have a finger shot off, the friends seem remarkably calm about everything that is happening to them and soon you begin wanting them to die; both because they’re horrible characters and just to see some action. For one brief moment in the film, things almost get going but soon it settles back into a familiar pattern as we watch an empty champagne bottle spin around on the floor whilst the girls do their best to weep their mascara down their cheeks and emote hard.

True to British horror form, the film is packed full with attempts to make it edgy, mainly in the form of drugs. No longer can a simple ghost or even an axe-wielding maniac be enough in films these days but the main characters need to have obvious vices which they must kick in order to show some development and therefore survive. Yawn. No wonder kids now are so fat, they have no evil villains to run away from all of the time. To be fair, the characters in Truth or Dare are tied up for most of the film (not much action, very dull) but even when one of them does manage to escape she doesn’t get very far. Most worrying of all is that neither the film nor the audience has any idea who the main character is. After twist, upon twist, upon twist you soon begin to lose interest in the story and hope that something comes along to wipe all of the little brats off the face of the planet. However unlike The Cabin in the Woods (the cabin in Truth or Dare is virtually identical) there are no redneck, zombie torture families when you need them. 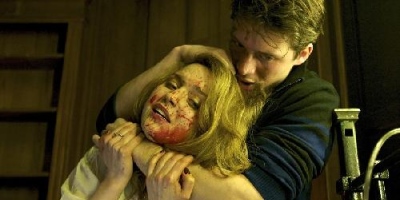 England is trying hard to prove itself at the moment in the Olympics. We know that we will lose out to America on pretty much everything, but with bad British horrors like this we are already losing to the US and their rather more innovative creations. Maybe that is a little bit harsh, but seriously, I’ve played games of pass the parcel that are more exciting than Truth or Dare. http://credit-n.ru/offers-zaim/migcredit-dengi-v-dolg.html http://credit-n.ru/forex.html