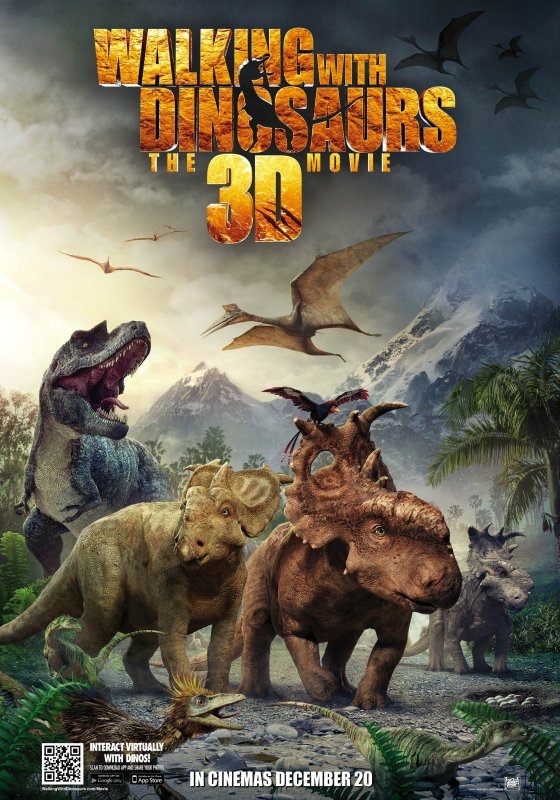 While his uncle (Karl Urban) and sister (Angourie Rice) head off to dig up a fossilised Gorgosaurus, Ricky (Charlie Rowe) — whose childhood fascination with dinosaurs has since given way to video games and music — remains with the car. When he is approached by a talking Alexornis called Alex (John Leguizamo), however, he is regaled by the bird with an adventure older than time itself. 70 million years previously, some time during the Late Cretaceous period, a young Pachyrhinosaurus (Justin Long) is preparing for his first migration. Eager to start so that he might reconnect with Juniper (Tiya Sircar), a female from another herd, Patchi is relieved when his father finally gives the order to depart. Migration is no easy feat, however, and he is going to have to overcome fire, predators and familial rivalry in order to escape extinction.

When it first debuted in 1999, Walking With Dinosaurs was the most expensive documentary series per minute ever made. It won praise for combining the traditional nature documentary format with cutting-edge, Hollywood-standard special effects and animatronics, presenting dinosaurs from Mesozoic Era as living, breathing animals where they are more often portrayed as static displays in museums or as rampaging monsters on the big screen. “Walking With…” became a BBC brand, and spawned sequel series (Walking With Beasts; Cavemen), companion books and even an Australian arena tour. Now, fourteen years later, the original series has been adapted for the big screen.

It’s difficult to imagine exactly who Walking With Dinosaurs: The 3D Movie is aimed at. Whereas the original series strove to be as scientifically accurate and visually realistic as possible, the film — co-directed by Mulan‘s Barry Cook and Neil Nightingale, creative director of BBC Earth — is aimed firmly at children, complete with talking dinosaurs and toilet humour. The resultant fusion of scientific fact and dramatic fiction is incredibly awkward and jarring, and the two directors’ apparent reluctance to compromise creates a disharmony that is very distracting, never more so than whenever a character — or what passes as a character in the Mesozoic era –opens its mouth to speak.

At some point during the creative process the decision was made not to integrate the voice work in any way. As such, you have Justin Long or Tiya Sircar engaging in disembodied dialogue while their respective Pachyrhinosauruses growl and roar. Computer-generated animation has become so sophisticated that audiences will happily buy a talking car or singing lemur (just last week Peter Jackson and WETA delivered a perfectly convincing talking dragon), but not for a minute to you believe in Patchi or Juniper as characters. It’s not just that the vocal apparatus doesn’t match the sounds produced, however, as the dialogue itself is often a poor fit for the action taking place onscreen. The script is rife with cliche, euphemism and American slang, while the visuals do little to conform to the conventional Hollywood animation.

And yet Walking With Dinosaurs: The 3D Movie is not unenjoyable. As with the original series, the special effects are second to none, and Cook and Nightingale make excellent use of the advancing technologies to produce something that is not just beautiful, but breathtaking. Although the film lacks a money shot comparable to Jurassic Park‘s introduction of the Brachiosaurus, it boasts a great number of smaller scenes that are just as impressive. The 3D is well-implemented, and any shot of Alex flying overhead is guaranteed to make you smile in amazement. Heck, any scene with Alex in it is likely to amaze; John Leguizamo is arguably the only actor who is actually trying, and his vocal work is surprisingly charismatic and compelling. It’s still disconcerting to watch him speak through a closed beak, but his narrations are engaging and his movements full of personality.