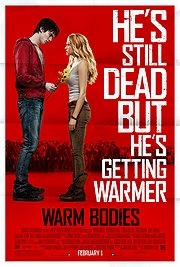 The mining of the vein of vampire lore for our cinematic gratification finally seems to be running out of steam. No matter, for there are plenty of other myths, monsters and magical fable to quarry for the mainstream screen – hence the recent foray into fairytales, witches, and now zombies. Previously the rotting undead had been caged mainly within the realms of horror and niche cinema, but nine years on from Shaun of the Dead we’ve finally got a second zom-rom-com… and in this one, the zombies won’t stay out of the ‘rom’ bit. 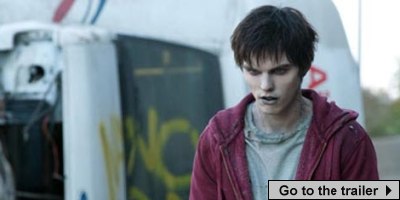 Nicholas Hoult is R, a morally-conflicted zombie who is bored to death of… well, of death. He spends his days since he was turned (he can’t remember when, or how) shuffling around the remains of his city, occasionally grunting at other corpses, wondering if there is anything more to his existence. Partway through a routine meal of delicious brain he lays eyes on Julie (Palmer), who sparks some humanity in him. Taking her back to his airplane hideout, her repulsion towards him begins to thaw, while R himself gradually, and literally, comes to life.

Both the trailer and the first half-hour of the film brand it as an appealingly fresh take on the genre, an indie horror with a side serving of romance. Hoult’s dry voiceover is pitched perfectly, lending real wit and humour to what are basic shots of zombies shuffling round an airport. Later in the action, when the couple return to the human safe zone, the film segues into something more clichéd; a teen rom com with some half-hearted action thrown in. While some films thrive on being indefinable (Kill List is a brilliant example of a work that defies category), Warm Bodies fails to commit fully to any of its genres, with any possibly darker moments hindered by the 12A certificate. Essentially, in its desire to appeal to as wide an audience as possible, it fails to fulfil its creative potential. 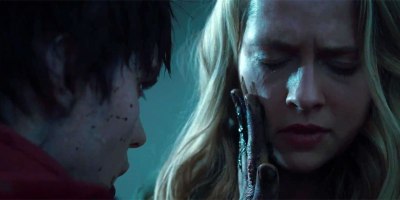 It also doesn’t help that parts of the plot are holier than R’s grimy hoody. It can feel churlish to pick apart the stories of films when they are executed with real flair and panache, but Warm Bodies doesn’t quite pull it off. Why not more explanation as to why the cure spreads quite so effectively, and suddenly? And, in the final action sequence, why on earth are our heroes running towards packs of flesh-eating ‘bonies’ and away from safety?

John Malkovich is criminally underused in a 2-dimensional part that shoehorns in a ‘stern father’ role to back up the Romeo and Juliet theme. (R and Julie, you see? If you didn’t get the reference before, you will after a brief balcony scene has whacked you round the head.) All this said, though, Warm Bodies is still a warm, entertaining film. A well-cast Hoult manages to exude charisma even when shuffling along smeared with brains. Teresa Palmer does a reasonable, if routine, job as Julie, and whether the fact that she looks eerily like a blonde K-Stew replica is a good thing depends entirely on your personal taste.

Warm Bodies is a perfectly decent way to waste an evening at the cinema – it’s just a shame that the second half doesn’t live up to its original, quirky start. http://credit-n.ru/kreditnye-karty.html http://credit-n.ru/offers-zaim/zaym-na-kartu_migcredit.html