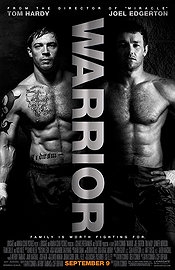 Gavin O’Conner could have easily traversed the beaten road of fighter-trainer bonding whilst glorifying MMA in the process. What O’Conner has actually created is a heartfelt account of how very distinct individuals from the same broken family manoeuvre their way through life, attempting to mend the seemingly unbendable bridges along the way.

Warrior begins with an uncomfortable reunion between father and son. An awkwardness arises from unresolved conflicts; Tommy (Hardy) and his mother fled from their family home 14 years previously to escape the alcohol-fuelled abusive father Paddy (Nick Holte). However, it appears their escape came at a hefty price. His mother became sick during their early years of freedom (and financial poverty), leaving only Tommy to care for her during her painful final days. This experience, coupled with a stolen childhood has left Tommy with an endless supply of raging bitterness that overflows during most interactions. But the lines are blurred; Paddy is no longer the hateable character Tommy has depicted. He lives a life of regret, finding comfort in religion and attempting to redeem himself with sobriety. Yet Tommy stubbornly refuses to accept that he has changed, preferring to tortuously relive the anguished moments from his past instead. On the other end of the emotional-stability spectrum, Tommy’s estranged brother Brendan (Edgerton) seemingly has it all; a lovely home, a family, a job he loves… But there is one problem: mean bankers. Basically, if Brendan doesn’t procure a large amount of money and soon, then he will lose his family home. Conveniently both brothers have a history of mixed martial arts (MMA) so with Tommy at a bit of a loose end and Brendan in desperate need of money it seems appropriate that they both enter a MMA tournament to win 5 million pounds. With Tommy asking Paddy to be his trainer, you would expect their damaged relationship to heal, but Tommy’s motives remain strictly business. I thought the cast was chosen well; Tom Hardy’s career has been rising steadily, culminating in a breakthrough performance as Eames in Inception, therefore the casting as one of Warrior’s lead roles was unsurprising. Joel Edgerton on the other hand, is relatively unknown in the movie industry, preferring Shakespearean roles at the theatre alongside his TV part in a hit Australian show The Secret Life of Us. Nevertheless, Edgerton definitely wasn’t overshadowed by Hardy’s performance and presented audiences with a believable character caught within a troubled past and a hopeless future.

The script is constructed well, with there are hardly any lines that don’t serve a purpose towards character or plot development. Nothing is rushed; Tommy’s mysterious background unravels at a good pace, as does the deepening desperation felt by Paddy the unforgiven. There are also brief yet witty moments of dark humour designed to lighten the mood a touch. However there are elements of the plot that are pretty darn predictable; both brothers would of course enter the same tournament and who do you think would be the last two men left for the final fight?

The tension during the competition phase is successfully built to a sweaty-palmed peak by the cuts to backstage, where the brothers are humming with nervous energy (not literally, although laughable moments are provided by Tommy’s odd warm-up stance). By giving each brother ample screen time to develop their back stories, you find yourself empathising with each of them; leading to emotional turmoil during the final battle. Whilst some films glorify these violent sports, O’Connor presented the fight scenes in a refreshingly brutal way, which is very tough to watch, especially considering your attachment to the characters. But I think it brings a necessary realism to the situation – the stakes are extremely high and we are never allowed to forget that, even for a scene.

Ultimately Warrior manages to convey the themes of brotherhood, loneliness and forgiveness in an honest manner, without diverting into cheesy territory – an impressive feat.

Due for release on Friday 9th September

Previous: New trailer for The Double
Next: American Harmony