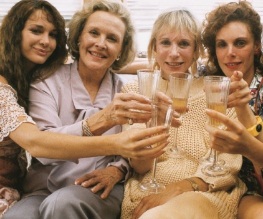 “You are making me eat. You are making me sick.” Excuse me while I don’t laugh at this so-called work of comic genius. I find it very difficult to believe that any human being with some semblance of intelligence would not walk away from this DVD about 15 minutes in.

The story is simple enough (read: there is very little story involved). A group of women have gathered to celebrate a friend’s birthday. A young Frenchwoman takes this opportunity to shove a camera in people’s faces and ask them to expose their innermost fears, which means that we get a lot of straight-to-the-camera work. Imagine innumerable one-to-one chats with near-hysterical women, crying about their insecurities and ramming accusations down your throat. “Do you want to be alone the rest of your life?” It makes for very uncomfortable viewing. And it soon becomes clear that, whilst the title might be “Eating“, the subject is not eating. It’s starving and binging, but I guess that just wasn’t catchy enough.

The birthday girl in question is, of course, crying and ramming cake into her face for the majority of the plot. Why? She’s just found out her adulterous husband won’t make it home for her birthday (big laugh number one), her bulimic friend has insulted her appearance, (hilarious!) and she’s realised that she has an eating disorder: “I use food for every emotion I can think of.” This is basically a horror movie. Only I haven’t decided if women are the evil, or food. And it’s also interesting to note that, whilst men are the topic of almost all non-food conversations, not a single man is ever seen on camera. They have no place in this faux documentary on body image and insecurity. Whoever heard of a man on a diet, anyway? For God’s sake…

“I can’t stop throwing up. I think I’m gonna die.” Yup, that pretty much sums up how I feel after watching this horrific mockumentary which delves “into the minds of modern women”. Do yourself a favour and don’t subject yourself to its evil powers, unless you want an aching heart, a pounding head and a sudden desire for a big slice of chocolate cake.

Previous: Opening Up A Lead And Coming Home Free: The Big Sleep at 65
Next: BFF’s ultimate line-up for Les Mis…