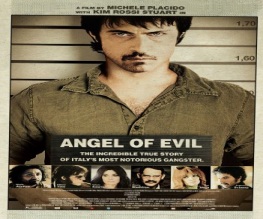 The content is good, great even; the infamous bank robber Renato Vallanzasca dominated the headlines in the 1970s with his brash, arrogant criminal adventures. The film starts with him in a cell, looking back on his life and trying to figure out how he got there. The gaps are filled pretty predictably; a troubled childhood followed by reform school during his teenage years and then onto petty crime which obviously leads to his criminal career. On top of that we have his overactive love life and tales of the band of merry gentlemen who make up his gang.

Kim Rossi Stuart (who also co-wrote the script) gives a fantastic performance as Renato; always in control of his portrayal with immense screen presence and charisma, though it has to be said that we are never given a sense of what makes Renato tick. We see him perform a plethora of criminal activity, but never quite understand his motivation. The result is an over-arching uncertainty as to why we even care about this guy. Stuart’s strong performance also slightly eclipses the other gang members (this may also be due to the script); their characters seem to be interchangeable – the only one that leaves any lasting impression is Enzo (Filippo Timi) Renato’s childhood friend turned junkie. The rest are just there as Renato’s entourage. Placido’s directing is solid the whole way through and despite the inclusion of some clichéd scenes (yes I’m talking about the montage of bank robbing, doing coke off shiny surfaces and throwing piles of cash into the air) it’s never cringe worthy. Negramuro’s soundtrack is certainly one to note; grinding guitars and a dash of electronica fit the scenes perfectly. It’s hard to put a finger on what it is about this film that is wrong. It should be a good movie; it has the story, the acting, the soundtrack and the directing but it just falls short of the mark. It could be down to nothing more than we’ve seen it all before. There needs to be a fresh approach taken with the well-worn Gangsta premise – the old format of simply following the life and times of a legend just doesn’t really cut it anymore, especially when it’s the sort of life that’s been done to death in cinema the world over. It will appeal to those that have an active interest in the subject matter, but most audience members will have forgotten its disposable charms before the credits have finished rolling.