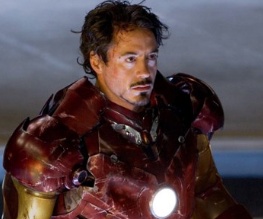 Iron Man 2 is sadly, a film with too many ideas. There’s court room scenes, Scarlett Johansson in various skimpy outfits, evil arms manufacturers and daddy issues, but none of it gels together well. The sexual tension between Gwyneth Paltrow’s Pepper Potts and Downey Jr as Stark that made the first Iron Man so great is now non-existent – they seem more like bickering siblings. So when director Jon Favreux decides to turn them into a couple it just seems forced and unnecessary.

It starts off well enough. We’re introduced to the sinister Russian, Ivan Vanko, played by Mickey Rourke, as he mourns his dying father then decides to make himself a bad-ass iron suit of his own. Vanko’s father, we find out later, helped Stark’s dad to create the Arc Reactor that powers Tony Stark’s suit, but never got any credit. Vanko is understandably annoyed, and plots to get revenge on Stark for the sins of his father.

After a very boring courtroom scene (it’s meant to be hilarious, but it really isn’t) and some set-up about Tony dying (another sub-plot that has about as much meat as a turkey twizzler), we get to the the best scene of the film – a super-powered Vanko attacking Stark as he’s driving in the Monaco Grand Prix. How Vanko knew Stark was going to be racing in the Monaco Grand Prix when his assistant Pepper Pots didn’t is a question that doesn’t need answering, as this scene kicks some serious ass. Racing cars get chopped in half by Vanko’s electric whips, a suitcase turns into a Iron Man suit-lite, and a good time is had by all.

Unfortunately Mickey Rourke is trapped in a lab for the rest of the movie building stuff, a complete waste of a potentially awesome villain. There’s another cool fight at the end of the film, but that’s about it. For a movie about men in weaponized iron suits there’s a glaring lack of battle scenes.

One long advert for the Avengers film

One of the most annoying things about Iron Man 2 is that sometimes it feels like a two hour advert for The Avengers film, due out in 2012. For those of you not in the know, Marvel Studios’ plan is to take the characters from Iron Man 1 & 2, The Incredible Hulk and the upcoming Captain America: The First Avenger and Thor films and put them all in The Avengers as a superhero team. Samuel L. Jackson is to play Nick Fury, the man who brings them together, and he cameos in Iron Man 2. I say cameos, but he’s in practically half the movie. This would be fine if there was a point to his appearances, but all he seems to do is tease the prospect of a “super secret boyband” (in the words of Tony Stark). Another pointless complication to a film full of pointless complications.

Overall Iron Man 2 is a big disappointment. Jon Favreau makes the classic Spider-Man 3 mistake of having too many characters and subplots. The CGI is impressive and the fight scenes are cool, but there’s just not enough of them. Favreau will really have to make Iron Man 3 bloody amazing to get this franchise back on track.

Does Iron Man part 2 deliver? Do you agree with our review? Let us know below!