For the uninitiated, Deadliest Warrior is a cross between Celebrity Deathmatch and Top Trumps, where two disparate warriors from history are pitted against each other for no discernible reason other than because it’s a bit of a laugh. Previous episodes have included ‘Ninja vs Spartan’, ‘IRA vs Taliban’ and ‘Saddam Hussein vs Pol Pot’.
So…well, you see where this is going don’t you?

BEST FOR FILM DEADLIEST WARRIOR JOHN GOODMAN MASH UP SPECIAL OH MY CHRIST I THINK I JUST SPAFFED MY PYJAMAS (YES I’M WRITING THIS IN MY PYJAMAS!!!)

With a penchant for comedy, Goodman has played some vicious bastards in his time, and it’s these two iconic Coen Brothers characters we’re pitting against each other today: place your bets proles and harlets! It’s Walter Sobchak (The Big Lebowski) vs Charlie Meadows / Karl “Madman” Mundt (Barton Fink) to find who is the DEADLIEST WARRIOR.


The psychological evaluation is a very important part of Deadliest Warrior. Will the heat of battle see them wither and crumble into a husk of their former selves, or call forth the true warrior spirit and feed off the blood of their opponent? We’ll find out…
Being a Vietnam veteran, Walter Sobchak likely suffers from post-traumatic stress disorder and may well have developed a chemical dependency as often happened to soldiers during the war – and, let’s be honest, hanging out with The Dude won’t help in that regard. As for Meadows / Mundt, well, he’s a classic schizophrenic, juggling two lives with ease. Like Sobchak, he’s also prone to flying off the handle over trivial matters such as not having your story listened to or someone cheating at bowling.
It’s a close one, but I’d say Meadows’ split personality, and the fact that one of those personalities is a serial killer-slash-potentially Satan is the clincher. I’M GIVING THE EDGE TO MEADOWS.

Judging by the films this Deadliest Warrior battle is likely to happen in close quarters: a hotel corridor, a bowling alley, an In-n-Out Burger, so close range combat could prove the decider. Walter’s training against the notoriously wily Vietcong means the surprise factor is a big element in his gameplan – coming at Meadows from God knows where. However, Meadows is an affable sort and could use the close quarters to play on the emotional frailty of Walter, before cutting his bloody head off and putting it in a ruddy box, his special move. However, training is very important in Deadliest Warrior, and you get the feeling one smell of trouble would light the touchpaper on Sobchak’s already short fuse. I’M GIVING THE EDGE TO SOBCHAK.


Two very different weapons at play here. Basically, it’s Sobchak’s bowling ball to the gut vs. Meadows sawn off shotgun to the head. I know what you’re thinking – no contest, but this is a marathon, not a sprint, and all factors need to be taken into account. Sobchak’s advantage here is that he will almost certainly be instigating the fight, and whipping a bowling ball out is much quicker than whipping out a sawn off shotgun, aiming and firing. That said, unlike the nihilists Sobchak so easily humiliates, Meadows is a big unit, and that padding could come in handy when deflecting Sobchak’s attack. Also in Meadows’ favour is ammunition – Sobchak has one shot, and one shot only. If it doesn’t disable his opponent, his disorientation could lead Meadows to go in for the kill. Because of this, I’M GIVING THE EDGE TO MEADOWS.


The final round – the X factors! Oh it’s getting serious now. We’ve all had a few, shit is hitting the fan and the two John Goodman’s have fire in their eyes and raging balls of fury in their sizeable bellies.
It’s a tough one this. Sobchak’s X factor is that he’s in the business of self defence. He owns a Security Company and, given his army connections, probably has access to a rather hefty arsenal of weapons. Handy with a pistol and a golf club and with incredibly skewed morals that lead him to dumping a disabled man out of a wheelchair and smashing up what he thinks at the time is a teenager’s sports car.
HOWEVER, and this has been alluded to already in this blog, there is a school of thought that suggests Meadows is, in fact, the devil incarnate. We know at the very least he can make a room burst into flames at the drop of a hat, but Sobchak is used to this kind of environment having rained down Napalm on Vietnamese jungles. Because of that, and his tempestuous nature, I’M GIVING SOBCHAK THE EDGE IN X FACTORS. IT’S NECK AND NECK. THIS ALMOST NEVER* HAPPENS GOING INTO THE BATTLE SCENARIO. 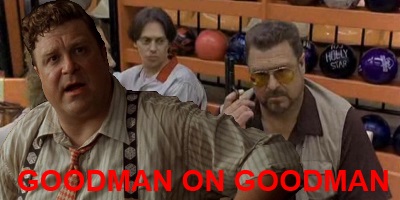 Sobchak sits sipping a tall boy at the bar when Meadows strides through the glass doors at the front of the alley, briefcase in hand, sweat dripping from his brow. The room gets noticeably hotter when he walks in, tiny beads appear on Sobchak’s cheeks. Is it nerves? It it fuck. This is where he wants to be.

Meadows begins conversation with Sobchak, trying to gain the trust of his opponent by approving his life choices and appearing to take inspiration from them. Sobchak has seen this kind of two-faced criminality before in the thick underbrush of South-East Asia, and is having none of it. BAM. Pistol from the belt, one shot to the thigh and Meadows is hit. It’s not a kill, but first blood to Sobchak.

Meadows skulks away towards the alley, where bowling balls appear more like cannon balls lined up on the hull of a ship. Sobchak sees this as his territory and moves quickly forward, but Meadows reveals his shotgun and before Sobchak has a chance to approach the bowling balls, a shot is fired straight into his shoulder, and the whole alley is engulfed in a fireball comparable with the hot brimstone rained down upon a sinful world by the angel of death himself! OH IT’S HOT NOW, THERE’S NO ESCAPING THIS, TWO FAT BLOKES SWEATING BALLS AND HUNGRY FOR BLOOD. SOBCHAK’S HAVING A FLASHBACK. HE’S IN THE JUNGLE. HIS BEST FRIEND SMITTY IS FACE DOWN IN THE MUD, HIS SCALP PARADED PROUDLY BY SOME LITHE VIETCONG TEEN. THAT’LL GO ON HIS WALL TONIGHT. IT’S A PROUD DAY IN HIS HOUSEHOLD AND NO MISTAKE. THE FIRE MOVES FROM THE WALLS INTO SOBCHAK’S EYES. HE THUNDERS TOWARDS MEADOWS WITH THE RAMPAGING FORCE OF A THOUSAND MIGHTY HORSES, RELOADING THE PISTOL AS HE GOES, FLURRYING BOWLING BALLS INTO MEADOWS’ FAT GULLET.

But Meadows stays calm! He sees the insanity and he uses it AGAINST Sobchak, performing the old switcheroo and throwing Sobchak to the bowling alley floor. Sobchak is staring into the eyes of evil, he is on his knees, begging for forgiveness. He can see Smitty. He can see the light! He can see the barrels of Meadows’ shotgun and…and… “Heil Hitler”.

It was a close battle and indeed Sobchak’s Vietnam training meant he wasn’t fazed by Meadows’ mastery of the occult. However, psychological evaluation played a big part, and at the end of the day Sobchak was just too mental to stand a chance. Meadows capitalised on this before delivering the kill shot. A devastating end for Sobchak. Hopefully Cynthia finds someone else to look after her Pomeranian while she’s away.