Oh my god, it’s TOTALLY Valentine’s Day today! And, as all of us here at Best For Film are well aware, there’s no date more important than February 14th – when else can we indulge our deepest criminal tendencies and send anonymous declarations of love to strangers we admire WITHOUT bringing down a police investigation on our heads? Exactly! But, more important than the process of carefully cutting letters from a newspaper and pasting them into a detailed sonnet of emotional blackmail,  Valentine’s Day is ALL about watching those adorable romantic comedies and dramas with someone we adore. Or, you know, with a platonic friend. Or maybe alone. So very desperately alone.

Here are the top 10 chick flicks to watch this Valentine’s day: 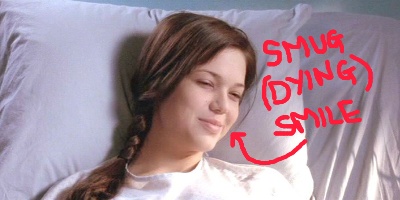 If there’s one thing we learned in our GCSE Shakespeare class, it’s that love doesn’t count until somebody dies. Seriously. It’s not just better to have loved and lost than to have never loved at all – it’s literally the only way to secure undying (oh, you know what I mean!) love from the guy or gal of your dreams. And, in A Walk To Remember, Mandy Moore does just that. She bags the hottest guy in town, alienates him from his BFFs and gets him down the aisle in under a year. How? Because she was dying. This girl has set the standards of emotional blackmail higher than ever before.

You know what happens if one of you doesn’t die young? You grow old together – gross! But, in The Notebook, wrinkles, grey hair and (deep breath) saggy bits don’t seem all too terrible. Especially if you have Alzheimer’s because then, like, you can go to bed and wake up every day not remembering that Ryan Gosling has somehow transformed into James Garner. Which would be totally confusing if you had to think about it for more than an hour at a time… 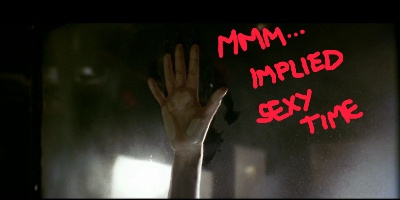 Leonardo Di Caprio is SUCH a sweetheart in this film. Not only does he die in the cutest way possible (self-sacrificial drowning is so in right now!), but he also has a really romantic sex scene with Kate Winslet. Yu-huh, pretty much every single girl out there has tried to recreate that single hand against the steamed windows moment – although it doesn’t have quite the same effect when you’re being watched by doggers in a gloomy car park.

This film does have a few good tips on being a princess and kissing, but the most important message of the Princess Diaries is, in my honest opinion, that there’s absolutely no viable excuse for being ugly. Anne Hathaway was SO not working that geek-not-chic vibe she had going on and then, voila! She took off her glasses, brushed her hair and she was hot. It was just that simple. And then she was allowed to hang out with the popular kids, scored a kiss with not just one but two hot men AND bagged a kingdom somewhere in Europe – proving that good things come to those who look good, every single time. Why do you think her pal Lily didn’t get a boyfriend or a tiara too, huh? 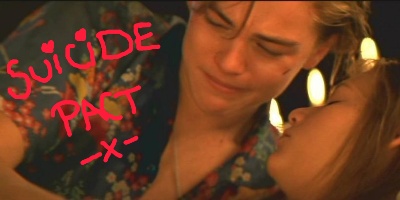 This film has got everything you need for a great Valentine’s Day movie; Leonardo Di Caprio looking impossibly gorgeous, disapproving parents, a doomed romance and a suicide pact. It’s so romantic I could just die – which is, ironically, what Juliet said when Romeo popped the question.

You know, there’s probably only one way you can make a doomed relationship even more romantic and that’s with a good old sing-song. People always feel more earnest when they’re belting out a tune – just look at Michael Buble. We believed that he was a shy and lovable man who just hadn’t met the right girl yet. Turns out he was mocking us all and, as a matter of fact, happily dating the woman dancing around in his music video. Lying bastard – we thought we could trust you Buble. At least in the Moulin Rouge, Christian (Ewan McGregor) believes every single note he’s blaring out at Satine (Nicole Kidman). 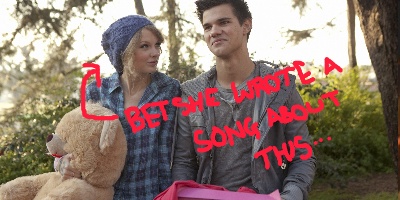 Are you serious? The clue’s in the name. Think a surplus of Hollywood stars, plenty of overlapping saccharine storylines, Taylor Swift (look up “love” in the dictionary and she’ll be sitting right there, peeping up bashfully from behind her fringe), 24 hour romances and enough “I love you” moments to render those three words all but dead, void and meaningless. Beautiful.

If ever there was a film that proved you CAN change a man, this is it. Before Belle came along, Prince Adam was living like a complete animal; didn’t brush his hair, didn’t say please or thank-you, didn’t use a knife or fork – y’know, real beastly stuff. She soon knocked that outta him with a few lingering glances and now they’re living together as HUMAN husband and wife. Let’s hear it for the girl! 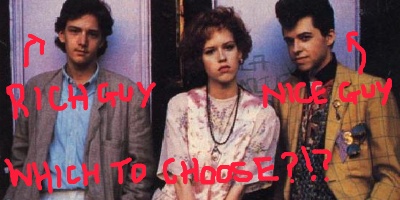 Ah, nothing like a bit of 80s nostalgia and a healthy dollop of teen angst to get you in the mood for candy hearts and unnecessary pink novelty gifts. Meet Molly Ringwald, one of the poorest people in school (try to ignore her car and everything, it ruins the illusion). She doesn’t fit in. But she has a cool job in a record shop and a bittersweet love triangle to keep her entertained. She must choose between the affections of Duckie, her doting childhood sweetheart with a fierce fashion sense, or Blane, a rich but sensitive playboy. One has a personality and a dynamite attitude, the other has good looks and a nice car. Thank fuck Molly opted for the latter – how can a relationship ever survive if your guy can’t drive, eh?

If you’re completely head over heels in love with your best friend, than this is the perfect vial of false hope for you. Because, even if it takes over a decade for Billy Crystal to overcome his commitmentphobia and plump for Meg Ryan as his life partner, he does eventually get there. Which just goes to prove that, in the game of love, anything can happen. And it has to happen. Otherwise what? What? Are we supposed to believe that he’ll never notice us? That he’ll never have that sudden dawning of recognition and we’ll die, miserable and alone, without him even having considered the idea of naked wrestling with us? IS THAT WHAT WE’RE SUPPOSED TO BELIEVE?

Will you be watching one of these on Valentine’s Day? Or will you be too busy watching the letterbox, hoping that at least ONE person out there finds you sexy enough to send anonymous love letters to?