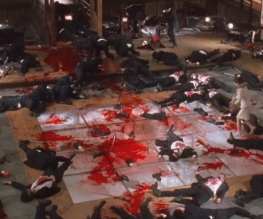 Vanity Fair recently decided to find out just how murderous Tarantino actually was. I mean, is he really that bad? Sure, he’s gouged out some eyes and severed some scalps, but who hasn’t nowadays? KIDDING! VF made the following chart to tot up the total death counts in Tarantino’s films, including Reservoir Dogs, Pulp Fiction, Jackie Brown, Kill Bill Vol I, Kill Bill Vol II, Death Proof, Inglourious Basterds and the new Django Unchained. Basterds scored the highest with a total of 396 deaths (remember that massive fire?), with Django ranking a close second at 64. Obviously, the numbers are an approximation due to the sheer impossibility of working out how many ninjas were pulverized in Kill Bill Vol I (evidently not all the Crazy 88 died), and how many Nazis died in the cinematic fire blaze in Basterds.

So, here it is. As per, click on the image to enlarge (warning: spoilers): 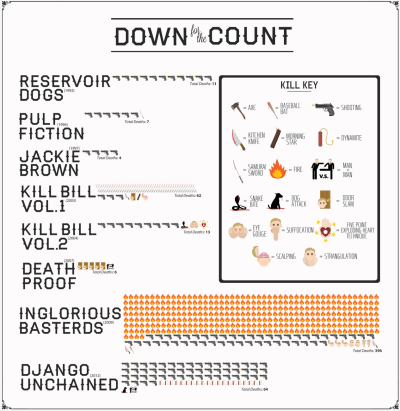 We only have a few qualms with this chart. Firstly, what the fuck is a door slam? We’re struggling to remember any door slams in Death Proof, unless ‘door slam’ qualifies as flying through a car windshield or thrown head-first into the dashboard of a car. Rather tenuous, don’t you think? No ear-cutting in Reservoir Dogs either, but we are pleased they included the five-point exploding heart technique in Kill Bill. We’re not fussy, we just like to see Quentin Tarantino done right. As it stands, we think he’d be pretty impressed with it.

All inaccuracies aside, it is a good-looking chart (we’d probably do a better job at it, but we’re awesome that way). We were actually hoping for a completely accurate numerical death count, but whatever. We were also looking for number of ruthless historical dictators killed, but sadly there were none. Who do we blame for this shoddy-ass job?

Think you could do a better job? Send us your Quentin Tarantino: Total Movie Death Counts chart! We actually really like this chart. We’re just jealous we can’t draw.