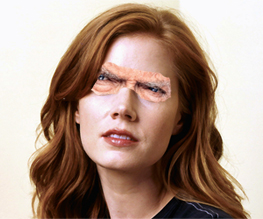 The new baseball-tastic [not a word – Ed.] Clint Eastwood film Trouble with the Curve may or may not include Amy Adams playing the role of Clint’s daughter, according to Warner Bros. Um… Glad we got that sorted. Apparently she has been offered the part, but as of yet has not officially excepted it.

She may not look much like his daughter, but we’re still hopeful. I mean, sure her face is still taught and firm – yet to settle into the majestic crags that adorn the face of our beloved Eastwood. And sure, maybe her steely gaze has yet to be fully tempered, but if she squints more, she can probably… Well, it’ll probably be fine. She’s in the Muppets Movie, after all.

The film itself is to be directed by Robert Lorenz, a long time associate of Eastwood’s, and follows an old baseball scout and his relationship with his estranged daughter. Sounds a bit Americana for our tastes, but we’ll wait and see.