Guardians of the Galaxy and Ant-Man confirmed 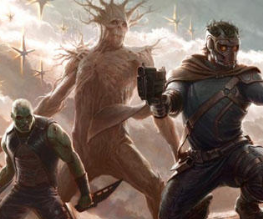 Remember the days when people used to read comic books rather than watch them? No, we can’t either. It has been announced that even more comic book heroes and villains will be coming to cinemas near us very soon and we are…erm…excited?

First up is Guardians of the Galaxy which features an assortment of heroes from various nerd planets. They have fought alongside The Avengers in the past, so it is possible they will be teaming up together in The Avengers 2. The artwork looks pretty hardcore so cue the extreme, sick inducing, 3D CGI. The film will open in cinemas on 1st August 2014 giving us enough time to reset our comic book movie levels.

Really dredging up the bottom of the superhero barrel is the announcement that Ant-Man will be made into a feature length film too. Director Edgar Wright previewed the footage at Comic-Con and it showed Ant-Man doing what he does best, being really small but really powerful and then growing into full size again and being a bit lame. Check out the official artwork below: Dull, huh? We love you Edgar Wright, we love the films that you make, but Ant-Man? It seems a bit like all of the big kids took the best superheroes and left you with this one so they could laugh at you later. Wright is standing up to everyone though with his film saying “It’s action-packed. Ant-Man will kick your ass, an inch at a time.” Yeah…we’re not so sure. The film has no release date yet, or cast, so we will have to keep everything crossed for it in the meantime. http://credit-n.ru/zaymyi-v-ukraine.html http://credit-n.ru/offers-zaim/creditter-srochnye-zaymi-online.html