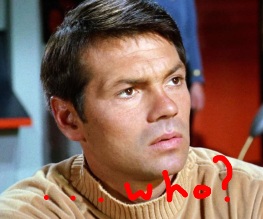 After months and months of speculation and various rumours floating around about who Benedict Cumberbatch will be playing in the Star Trek sequel, Karl Urban has gone and let the Klingon out of the bag at this year’s Comic-Con.

When Urban was asked about the new Star Trek movie he revealed that Cumberbatch will not in fact be playing Khan but…dun dun daaaaa…Grant Mitchell? Sorry, GARY Mitchell. Which is quite possibly the worst villain name ever! Seriously, Bob McShinytits would have been better.

According to some very nerdy internet sites, Gary Mitchell (a 23rd Century human…), is a key yet little remembered baddie in the Star Trek franchise. Gary Mitchell it seems was an old buddy of Kirk’s back in the good old days who managed to acquire telepathic powers and decided to use them for great evil, threatening the Starship Enterprise and its crew.

Apart from sounding like a chavvy pub owner, we can actually imagine seeing some nice character dynamics forming here and the potential for a great Trekkie Bromance-which undoubtedly will end in a lot of death and destruction. Yay!

Also Karl Urban has mentioned that Benedict Cumberbatch as Gary is really rather good, saying: “He’s awesome, he’s a great addition, and I think his Gary Mitchell is going to be exemplary.” Well it is Benedict Cumberbatch after all so we were never expecting anything less than totally splendiferous in the first place.

After the success of the first Star Trek film and under the guiding hand of J.J Abrams, our misgivings are surely unfounded. Just make sure you keep one hand on your wallet at all times…
http://credit-n.ru/zaymi-nalichnymi-blog-single.html http://credit-n.ru/kurs-cb.html

Previous: Fassbender to star in Assassin’s Creed adaptation
Next: The Wolverine casting announced