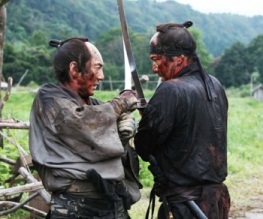 Hara-kiri was the ritual suicide performed in Japan by samurai as an alternative to disgrace or in protest against injustice. Highly ritualised, the method, otherwise known as seppuku, was self-disembowelment with a short sword. It was preferable for a samurai to inflict this death upon himself than suffer the disgrace of being killed at the hand of an enemy, and was a demonstration of their courage, honour and moral character – everything that makes them samurai.

13 Assassins opens with a demonstration of hara-kiri by a samurai protesting against the despotic cruelty of Lord Naritsugu (Goro Inagaki), the Shogun’s brother, who rapes, mutilates and kills for pleasure. It is a powerful opening scene, for while the audience sees neither blood nor gore, the sound effects are played out in all their sickening glory, and it is by no means a quick death.

A high-ranking Shogun official, Sir Doi (Mikijiro Hira), is appalled by Naritsugu’s horrific deeds but is not powerful enough to stop him. So he seeks out the renowned samurai Shinzaemon Shimada (Yakusho) to assassinate the young Lord. Shinzaemon gladly takes up the challenge and recruits 11 elite samurai to carry out the task. They plan to divert Lord Naritsugu and his retinue on his journey home from Edo (Tokyo), and transform a peaceful country village into a lethal battleground. On their way they pick up a young and wild exile Koyata, making them 13. While waiting for their enemies to arrive, they discover that the Lord’s numbers have swollen to 200. Despite the unbelieveable odds stacked against them, the samurai hold their ground and determine to fight to the death to complete their mission. 13 Assassins is a beautiful and serious homage to the Jidaigeki (samurai period drama), with flashes of humour and character capering to leaven the meal. The first hour may be a little slow but the meandering narrative builds up to a satisfying and thrilling 45-minute battle scene which embraces all the dazzling arts of the samurai. The village of Ochia is inventively turned into a death trap by Shinzaemon’s recruits, with explosives, sliding gates woven from wood and even some stampeding burning bulls. The foolhardy courage of men outnumbered fifteen to one is magnificent and while there is some hammy acting, it fits with the extravagant, grandiose material.

There is a surprising purity to Miike’s violence, a poetry to the grotesque business of losing limbs and lives, and the eagerness with which men sacrifice themselves draws you into the ‘death and honour’ mindset of feudal Japan; so different from our modern attitudes. Like any war or battle film, the casual waste of life is horrific, but in between the broken torsos there is still the chance to appreciate the beauty of a flowing stream tinted red, the perfect choreography of whirling blades and the clean sweep of a sword severing head from neck. Miike is a hugely prolific director, his name attached to over 80 films since his debut in the early 90s, and his style wanders from genre to genre. With 13 Assassins, which is a remake of a 1963 black-and-white of the same name, he plays it straight, focusing on the enigmatic ritual and codes of the samurai in the dying days of feudal Japan (which came to an end in 1868, paving the way for a new age of capitalism). The film’s extermination of so many samurai, by sword, arrow and dynamite, echoes this decline of the old way of life, as modernity marches into Japan behind weapons of mass destruction. During the film, one samurai laments the loss of the old way of fighting: “How many samurai use their swords in battle?”. Instead, firearms are the new way of death, weapons which before in Japan had been rejected as dishonourable.

Miike’s film may not be to the taste of those who like their action sequences gung-ho, frequent and to involve exploding helicopters, but for fans of the samurai genre it is a beautifully shot project, brimming with the director’s passion for his Jidaigeki. http://credit-n.ru/offers-zaim/moneyman-srochnye-zaimy-online.html http://credit-n.ru/offers-zaim/sms-finance-express-zaimy-na-kartu.html

Previous: David Cronenberg to make R-Patz get a haircut
Next: The Door