A Good Day To Die Hard 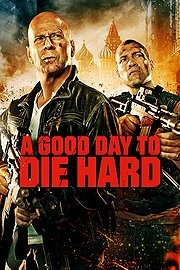 Back for a fifth installment is Bruce Willis as John McClane, guns blazing, in the worst Die Hard of the bunch. Introducing us to his estranged son Jack, played by Jai ‘Action Man’ Courtney (Jack Reacher), the pair take on a couple of Russian terrorists who accidentally “caused Chernobyl”. But it’s not just the ridiculous plot that make A Good Day To Die Hard such an epic failure, it is the lack of everything that made the first four films a joy to watch; the humour, the villains and the wise-cracking action hero. Without these, this a poor tribute to the franchise, and one that even Die Hard fans won’t buy into. 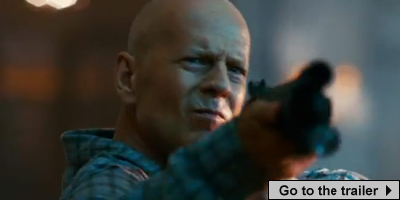 Former NYPD detective John McClane travels to Moscow to help out his son Jack, who has been arrested for shooting a Russian official. He finds out that Jack is working undercover for the CIA to protect government whistleblower Komarov (Sebastian Koch) from an unfair trial, and that there is a weapons heist planned at the Chernobyl power plant. Teaming up with his son and Komarov, the three of them travel to Chernobyl to stop the Russian terrorists from attacking.

Following in the recent steps of Sylvester Stallone (Bullet to The Head) and Arnold Schwarzenegger (The Last Stand) with limited success, Bruce Willis, 57, refuses to step down as 80s action hero John McClane and has instead said that he wants to play the role in yet another sequel. He has said: “I want to do Die Hard 5, then one final Die Hard movie — Die Hard 6 — before finally hanging that white vest up for good.” However, here he looks like he couldn’t care less about the role, and his lack of enthusiasm is infectious. 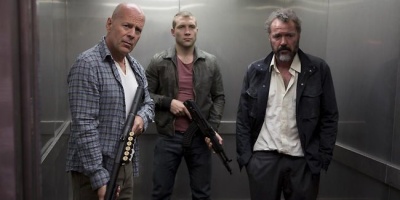 It is screenwriter Skip Woods (X-Men Origins: Wolverine, The A-Team) who is to blame for the terrible writing; which manages to make McClane and his son unlikeable characters, devoid of wit or human feeling. Bruce Willis plays a brainless unstoppable mean-machine and John Jr/Jai Courtney is little more than a poor man’s Jason Statham.

One of the problems is that this is the first of the franchise to take McClane out of America. In the Russian setting, he looks ignorant and out of his depth, surrounded by enough subtitles to make this a Russian blockbuster. As for his age, his daughter (who we met in Die Hard 4.0) calls him ‘grandpa’ as joke, but his age is never a concern as John is seemingly superhuman, suffering falls from multistory buildings without a scratch and exposure to toxic waste without stopping for air. 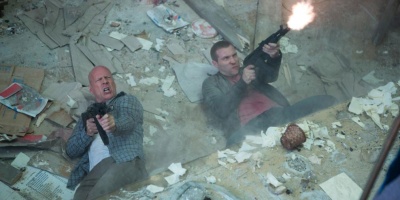 John Moore sits in the directing chair and throws us into a full frontal attack of continuous action sequences, choppy editing (reminiscent of his Max Payne past), and cringe-inducing CGI. In fact, the film is so action laden and gratuitously violent that it over-weighs the plot, making the father-son macho bonding look more like a side note than a sub-plot. Taking a lesson from Taken 2, Die Hard 5 cuts away enough of the swearing to get its 12A rating. Even McClane’s classic line ‘Yippee-ki-yay, motherfucker’ is obscured into ‘yippee ki-yay’, falling flat on its face.

John McClane has in the past been voted the “Greatest Movie Badass of All Time” and so it’s sad to see his fall from grace here. A Good Day To Die Hard is a film that will leave you feeling completely hollow. Leave your brain at the door.

Previous: Mama
Next: Best for Film’s Favourite Flicks #12 – Hannah and Her Sisters 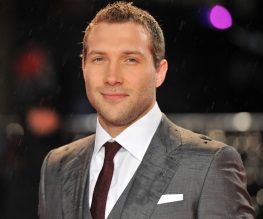