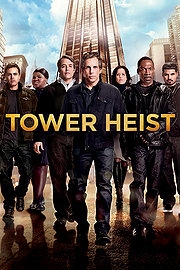 So, America’s favourite everyman Ben Stiller is Josh Kovacs, the hard working manager of ‘The Tower’; a high class, high rise, high hopes apartment block in downtown New York. Not your average domicile, The Tower is more of a up-market hotel where the wealthy patrons are in fact permanent residents, waited on hand-and-foot, day-and-night by Josh and his team of dedicated serving staff. It might not be the most glamourous way to make a living, but heck, it keeps them close to the most powerful financial players in the country – and that can’t be a bad thing, right?

Occupying the penthouse suite in this bastion of wealth and privilege is our Bernard Madoff, renamed Mr Arthur Shaw (Alan Alda), an aging investment banker who, despite his lofty social position, shares a close, friendly relationship with Josh and his staff. That is until the FBI come turn up. After a botched escape attempt, Mr Shaw is arrested on suspicion of committing mass fraud, standing accused of losing billions of dollars of his investor’s money. The initial concern of The Tower’s diligent staff soon turns to outrage when it transpires that our main man Josh had (rather unwisely) invested the entire workforce’s pension funds in Shaw’s crooked portfolio. Ah. After taking hollow revenge by smashing Shaw’s car with a golf club, Josh and two of his staff Charlie (Casey Affleck) and Enrique (Michael Peña) are, understandably, sacked. Conversely, such is the privilege of the rich that Shaw is merely placed under house arrest in his penthouse suite in The Tower pending trial. Seeking justice (not to mention significant remuneration) Josh and his similarly ousted colleagues hatch an outrageous plot: to recover their stolen pension pot by breaking into the heavily secured Tower and raiding Shaw’s hidden safe. What can go wrong?

There’s no denying that Tower Heist – essentially a slap-stick comedy with the word ‘RELEVENT’ smeared all over it -isn’t great, but neither is it as bad as you might expect. Ben Stiller’s natural comic ability is what drives the film, and his talent for wringing relatable madness out of every scene mean he’s a constant joy to watch. And actually, he’s pretty well matched in his co-stars Affleck and Peña who, apart from being rough approximations of the same ‘stupid one’ character, both provide several genuine laugh out loud moments. These three are, however, crowded out by a bloated cast of extraneous bodies – most notably Téa Leoni who plays the FBI agent assigned Shaw’s case. Leoni sloshes through her scenes, delivering her lines with a kind of lopsided, whiny insistence of an overbearing drunk, which altogether underlines the pointlessness of her character. Elsewhere other characters simply fail to make an impact; Eddie Murphy’s foul-mouthed performance as petty criminal Slide lacks the fire of his earlier work (will he ever be as good as he was in Trading Places?) and the eminently talented Matthew Broderick is wasted on a downtrodden “former financial giant” character who’s never given quite enough to do.

Just as the most promising characters are squashed out the picture, so is the promising second act of the film. And as things begin to gather pace and the farcical interplay between the bungling would-be heisters gets going we are finally presented with the promised heist – a nauseating, drawn-out Hollywood set-piece which neither entertains nor amuses. Overall, the strength of the cast makes Tower Heist good fun, even if the film itself is entirely derivative. The obvious similarities with Ocean’s Eleven are no accident – writer Ted Griffin is probably best known for his 2001 respin of the Frank Sinartra’s 1960 heist-com. Tower Heist is, therefore, a rehash of a rehash. However if you enjoyed Ocean’s Eleven then Tower Heist is just about worth a punt, and if you look hard enough between the convoluted opening act and the needless grandstand finale you’ll find something genuinely funny. Hell, at least you can kid yourself that you’re catching up on your current events, right?

Previous: More Cabin Fever films on the way
Next: New Shame trailer gets all stylish and boasty