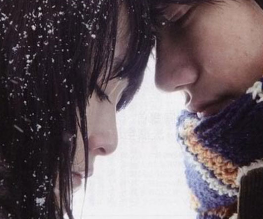 When is the film better than the book? Generally never, it seems. Captain Correlli, The Girl With The Dragon Tattoo, The Da Vinci Code: the list is endless. Studios have a way of taking your favourite novel and turning it into something barely passable, often hurrying a project into production in order to cash in on a built-in audience, or casting Nic Cage as a mandolin playing Italian. Like the recent glut of re-makes or the endless round of comic book adaptations, it smarts of a lack originality or risk-taking. Here, however, Franco-Vietnamese film-maker Anh Hung Tran has taken Haruki Murakami’s bestseller and turned it into a bright, cinematic jewel, capturing the novel’s essance, whilst maintaining a distinct artistic vision all of his own.

Set in and around Tokyo in the 1960’s the film follows student Watanabe as he navigates the pitfalls of love and loss during the last few months of his teens. After the suicide of his best friend Kizuki (Kengo Kora) he forges a powerful bond with Kizuki’s girlfriend Naoko (Rinko Kikuchi, last seen in Babel), who has retreated to a psychological facility in an attempt to recover from the tragedy. But are Watanabe and Naoko meant for each other, or is it simply Kizuki’s death that draws them together? Soon, Watanabe is also fielding the attentions of Midori (Kiko Mizuhara), a fellow student and free-spirit, yet somehow she’s just as tantalisingly out of reach as the fragile Naoko, if only because she has a boyfriend. What is a young lad to do? This is teen drama, but not as we know it. The angst of the protagonists is played for neither laughs nor sentimentality, but instead as a treatise on love, life and mortality. Here, there is far more at risk than a broken heart. These characters are asking themselves if they can live, with each other, or at all? Love is something to be sought after, but it’s dangerous, it can kill. When Wantanabe hurts himself at work he later pulls out the stitches and opens the wound, bleeding it out, in a gesture less painful than his relationship with Naoko. The destructive nature of love is further explored in the guise of Watanabe’s college room-mate Nagasawa (Tetsuji Tamayama). The archetypal ladies man Nagasawa teaches Watanabe the art of seuduction, but this casually cruel approach to romance results in Nagasawa’s girfriend becoming yet another victim of emotions altogether to painful to bear. If all this sounds a bit heavy going, well, at times it is. It’s also richly rewarding. Watanabe’s journey into adulthood is a strange and sensual journey, a million miles from the traditional approach to teen or doomed romance. The drama is offset by the lush visual style and a beguilling soundtrack from Johnny Greenwood (who often sounds like he’s scoring Kubrick’s 2001, which is by no means a bad thing). What’s most impressive, however, is the sense of a director crafting something utterly unique from source material that will be familiar to many. With a bit of luck Hollywood will be taking notes.

Previous: Orange(Wednesday)s and Lemons #11
Next: Island