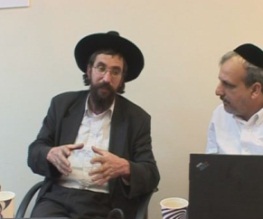 Religion.com is a documentary that follows the progress of two men campaigning for opposite causes in the Jewish state of Israel. Yigal Revach, an advertising executive, embraces technology and is working to create a safe ‘Kosher’ internet, where the ultra-Orthodox Haredi community can enjoy freedom of information minus corruption and temptation. Rabbi Micha Rothschild on the other hand, campaigns against Haredi use of the internet and is keen to preserve a culture untouched by outside influences.

When we first meet Revach at his advertising agency in Bnei Brak, he is smoking a cigarette whilst shouting into the telephone ‘Mad Men’ style. It isn’t too long however, till we are transported to the Ukraine, following him on one of the regular pilgrimages he takes when the stresses of his job become too much, to ‘refuel when uninspired’. Along with a friend he visits the grave of a revered Rabbi. He prays, rocking backwards and forwards and starts to cry. Revach supposedly being the ‘westernised’ character in this documentary, I couldn’t help but wonder whether I would find Rothschild bordering on extremist?

I am pleasantly surprised to find Rothschild to be a softly spoken and gentle character. A campaigner against the evils of the internet, he spends his days putting up posters around Bnei Brak. On this particular day Rothschild’s poster depicts a young boy sitting at a computer. With each picture the child becomes increasingly unrecognisable, from innocent to punk-like, till he has become a monster. This strange propaganda, though unsophisticated by Western standards, seems to work as a good deterrent in the less cynical Haredi society. With many Haredi using internet forums to anonymously voice opinions on issues that affect them, there is an obvious opportunity to corner the market. Revach’s company is in the process of creating a niche ‘pure’ internet, aimed at the Haredi populace, with the emphasis on information rather than leisure. You can’t help but get the distinct feeling throughout the documentary that Revach’s motivation is more likely greed than concern for the Haredi community.

Rothschild’s home is modest but cramped, with each small room playing host to multiple functions, yet he seems to be very satisfied with his lot. In opposition to Revach he dedicates his life to his cause with no obvious desire for material gain or power. I couldn’t help but respect his convictions even if I didn’t fully understand them. He obviously feels the burden of protecting the Haredi people keenly. He speaks of ‘building the wall higher’ so that their community is protected from outside influences.

Throughout the film Revach tells of a restrictive orthodox upbringing, and of how he left his family home in order to see the world and experience wider human contact. He expresses admiration for the simplicity of Ukrainian life, claims to aspire to the simplicity of the Torah and prays for his children to be religious scholars. However there are several bizarre scenes throughout the documentary showing his drinking, smoking and bragging that seem to sorely contradict his claims. I couldn’t help but wonder how much of his love of religion was just good self publicity?

By the end of the film I found I had warmed to Rabbi Micha Rothschild. He seemed to be a kind man regardless of his strange propaganda and extreme views. When judged by Western standards he would be considered naive or ignorant, yet a society where faith is so central is virtually unimaginable to us. In Revach I see a man at odds with himself. His feeling of duty towards his religion is evident, but you can see he finds the lure of money irresistible.

Religion.com was an eye opening insight into a society that shuns what we in the West take for granted. The characters were fascinating and whilst I wouldn’t say it’s an absolute must-see, I found it to be both informative and engaging. It’s definitely a film that raises some interesting questions about how westernised culture affects societies and individuals in the rest of the world.