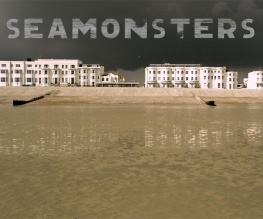 Seamonsters is a film about love. And loss. And growing up. And suicide. And aspirations. And domestic abuse. And drugs. And prejudice. And friends. And sex. And travel. And fighting. And fishing. And cookery courses. If it had tackled one or two of these disparate topics, it might have managed to do them justice; as it is, the makings of a reasonable film are lost in the torrent of half-formed plot points.

Sam (McMullen) and Kieran (Noi) are old friends who seem content to bum about their nameless Northern seaside town forever – they fish (well, Kieran fishes and Sam watches), shoot zombies in the arcade and sit on the beach drinking cider with Kieran’s girlfriend Moony (Henshaw). Everything seems relatively hunky dory until the day Kieran persuades Sam to help him collect a bucket of ragworms, which he promptly throws into the face of one of the girls living in a derelict static caravan park nearby. Charming.

Despite their inauspicious meeting, Sam eventually manages to talk to Lori (Mimmack) and finds out there’s much more to her than Kieran’s half-formed insults. As he and Lori start to form a connection, Kieran decides that whatever Sam wants he needs to have first. His actions set in motion a chain of events which eventually see Kieran, Sam and Moony travelling all the way to London and back – although Lori stays in the North for good. Will Moony ever do what makes her happy? Will Sam ever realise that Kieran is a colossal dick? And are there really sea monsters over the horizon? For the first few minutes, Seamonsters feels like something a little more than a film put together from well-worn archetypes and little else. I almost resent it for getting my hopes up; from three or four scenes in it’s totally apparent how the story is going to play out. Sam and Kieran are immaculate examples of Boy Next Door and Bad Boy characters, Moony’s a typically wholesome and unthreatening Girl Next Door and poor look-at-me-progressing-the-plot Lori is as shameless a Manic Pixie Dream Girl as I’ve ever seen. 60s relic Rita Tushingham is periodically wheeled on for no apparent reason, and every time things lag a bit there’s either a fight (Sam/Kieran), a sage remark (Lori/Moony) or an unexpectedly fancy meal (Moony – remember the cookery course bit?) to move things on. This is plotting-by-numbers at its basest.

The shame of it is that the actors are really not bad. Reece Noi’s Kieran is convincingly troubled and bubbles over into believable rage, whilst Jack McMullen is thoughtful and measured without letting Sam be as boring as he easily could have been. Leila Mimmack’s soulful looks and neat chunks of philosophy bring Lori to life and Georgia Henshaw – who has by far the most underwritten role of the four leads – makes Moony charming, funny and genuinely likeable. All four characters are, I suspect, better performed than they were written. If Seamonsters has a use, it will be to propel its stars to bigger and considerably better things. As for director Julian Kerridge, it’s only fair to point out that technically speaking the film is superb; beautifully shot and enticingly scored, everything about Seamonsters appealed apart from the leaden plot (which is in itself adapted from a play by Martin Sadofski – who knows with whom the fault lies?). Give him a few more years out of film school and Kerridge could be one to watch. This film, however, is not.