Heartbreaker, Romain Duris flexes himself further than ever before in this extraordinary portrait of, as the French title has it, a man who wants to live his life. Sharp, dynamic and unbearably emotional, this taut drama is the real deal. " /> 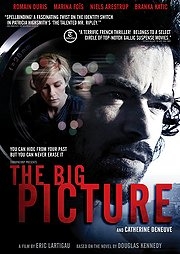 Romain Duris is a man of many parts; in recent years he’s played a thuggish estate agent who dreams of being a concert pianist, a dancer waiting for a heart transplant, a professional con man who breaks up unhappy marriages for a living, and Molière. Now he turns his hand to straight drama as a lawyer who gives up everything in the hope of saving his family and escaping his past. The Big Picture is good, but Duris is off the charts.

To the untrained eye, Paul (Duris) has a pretty perfect life – he’s a successful lawyer with a big house, a gleaming car, a beautiful wife (Foïs) and two absurdly charming children. However, all is not as it seems – his wife Sarah’s frustrations over her failed writing career are threatening the stability of his marriage, his boss Anna (Deneuve) is unwell and wants him to take over the firm, and his own dreams of becoming a photographer are long since lost. AND he thinks Sarah might be having an affair. It’s a tough gig, this ’emotionally strained protagonist’ business…

After a horrible accident scuppers his chances of patching things up with Sarah, Paul decides his only option is to disappear; assuming a false name and abandoning his own identity, he leaves the country (and blows up his yacht. LAD) in the hope of starting a new life far away from his troubled past. However, fate has obviously decided otherwise – and as Paul’s real identity grows increasingly threatened it seems as if simply wanting to live one’s life is just too big an ask. Douglas Kennedy’s acclaimed 1997 novel The Big Picture feels a little dizzy from its frenetic dash across the Atlantic, but you probably won’t mind – despite the fact that there’s only about six minutes of significant action in the whole film, it’s genuinely gripping. All credit for this must go to the extraordinary Romain Duris; mad plot twists, endless secondary characters and more darkly portentous shots than you could shake an ANGST STICK at come and go, but he holds the entire production together through sheer force of will. The other main-ish performances are all worthy enough – Marina Foïs and Catherine Deneuve are both memorable as the women who Paul loves but, each in their own way, is unable to satisfy, whilst Niels Arestrup’s drunken Serbian newspaper editor is everything you want from those four words – but Duris carries this film and he could do it alone.

Visually, the film is as impressive as Paul’s photographs. The action, which flits between Paris, Serbia, Italy and various boats, provides an endless stream of beautiful backgrounds against which Duris can stride around looking purposeful (and beautiful, my God), and the contrast between his opulent home life and spartan post-‘death’ existence is vividly portrayed. You may find yourself drifting a little in the final act as the plot knots itself into ever more confusing tangles, but it’s worth sticking with it (even the totally insane last fifteen minutes) for the sake of the hugely satisfying final shot and the cathartic joy of collapsing into the credits before returning to your non-shattered life. The Big Picture is, admittedly, tailor-made for Romain Duris fans, but there’s plenty here for those who need more from a film than his endearing stubble. From the sparse, perfectly timed dialogue to the genuine emotional tension which vibrates throughout the film, this is a cracking drama which deserves a wider audience than the one it’s likely to get.