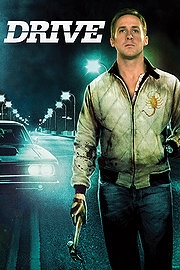 A beautifully shot, well-paced and achingly stylish homage to 80s music, 90s Tarantino and 00s Gosling jaw, Drive is the kind of thriller that Grindhouse fanboys dream of. Based on a novella by James Sallis, director Nicolas Winding Refn dials down the story, pumps up the violence and delights in creating pitch-perfect, almost unbearable atmospheres to snake around his central players. Anchored by a beautifully measured performance by Ryan ‘In All The Films’ Gosling, Drive will certainly satiate gore-mongers, engine-fanatics and those who get their kicks from the visual. It’s just a bit of a shame that the twists its plot takes aren’t nearly as satisfying as that of its vehicles. So, Ryan Gosling plays The Driver; a man of few words and presumably fewer bicycles. By day he makes his money as a stunt driver for Hollywood’s blastiest films, but by night he’s a for-hire taxi man; no matter what the dark deed, if you give him a time, a place, and a shed load of cash he’ll be your getaway man. You get five minutes to do the job – five minutes exactly – and as long as you’re in the back-seat before the clock runs out he’ll make sure he gets you clear of the police lights. With no discernible companions save the guy who runs the garage he works in from time to time (a glorious Bryan Cranston), and seemingly only happy when he’s behind the wheel, it doesn’t take long to conclude that this mysterious, largely silent fellow is a pretty restless soul. That is, until he trips over a glance thrown his way by a young woman named Irene (Carey Mulligan and her face full of eyes); a neighbour in his apartment block with a young son and a no-good husband currently in prison for Bad Shit.

From the instant the two meet, chemistry leaks out of every beautiful pore they own, and though it’s all too clear nothing can happen while Irene is a taken woman, it doesn’t stop them from developing an urgent, sudden friendship. And when we learn that Irene’s husband Standard (Oscar Isaac) is not only back, but still in big trouble for money he owes to the mob, it doesn’t take much to convince our man that it’s only with his expertise that they can ensure the safety of the family he’s come to feel so much for… The interesting thing about Drive is that it definitely, definitely shouldn’t be as good as it is. Though the script is icily, gloriously sparse, the plot itself is deeply silly; spiralling wildly out of control after the first half an hour and anchored only by the clunking mobster-film clichés it grabs along the way. The genuinely interesting premise sold to us in the opening – one driver, five minutes to Do The Job, and A LOT of BAD-ASS CAR ACTION – is utterly abandoned within minutes, and in its place we get a fairly thin, deeply unoriginal mob-storyline in which interesting twists are brushed aside in favour of predictable action, and where intrigue is injected purely via the means of People Dying Really Suddenly.

The surrounding players (Christina Hendricks, Ron Perlman, Albert Brookes) are largely wasted on cut-out characters whose motivation we never really understand or even care about, and the conclusion, while visually satisfying, feels rushed and half-baked in terms of narrative. But, strangely enough, it genuinely doesn’t matter. Though Drive doesn’t really deliver in terms of story, every other aspect shines so brilliantly that plot holes are skimmed over, character motivation falls by the wayside and you cannot help but find yourself edging further and further towards the edge of your seat even as what you’re watching becomes sillier and sillier. The thing is, this is Gosling’s show, and his brilliantly understated Driver gives the film the weight the plot fails to provide. The central tension – the impossible relationship between he and Irene – is almost unbearably poignant, and where the wordlessness of Eastwood’s Man With No Name made him all the tougher, Gosling manages to fill his protagonist’s silences with tenderness, softening a potentially stereotypical hard-man into a multi-layered mystery that is absolutely captivating. Thanks to Winding Refn’s iron grip on the visuals, no shot is wasted; he carefully builds beautiful scene after beautiful scene, leaving you utterly powerless to resist the seductive charms of his central character and the tale that surrounds him. It might well be that you end up being a little disappointed with Drive, but I can at least promise that the feeling won’t kick in until it’s left you for dust.

Previous: First Trailer for Being Elmo: A Puppeteer’s Journey
Next: Queues, galas and red carpets: dispatches from the TIFF