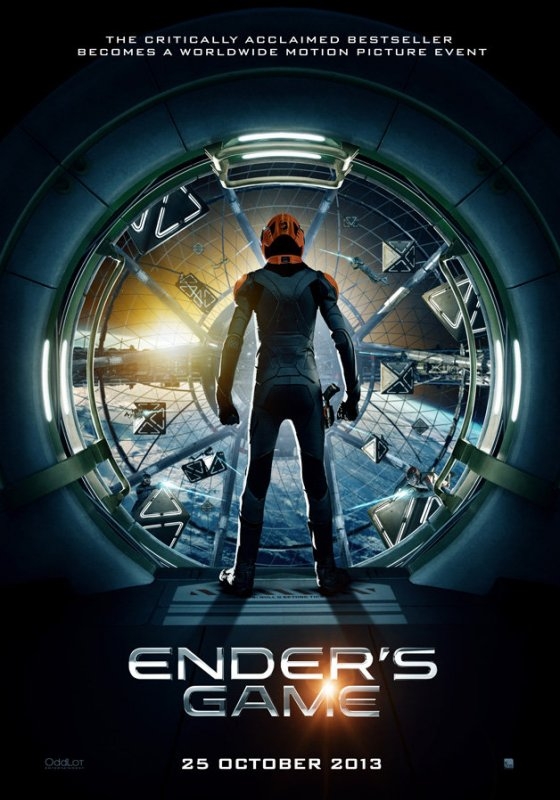 As ever, Steven’s review was first published on his own (brilliant) site popcornaddiction.com. Head there post haste.

Years after an alien invasion, in which the formic race’s attack on Earth was foiled by jet-fighter pilot Mazer Rackham (Ben Kingsley), Andrew “Ender” Wiggan (Asa Butterfield) is scouted for Battle School by Colonel Hyrum Graff (Harrison Ford) and Major Gwen Anderson (Viola Davis) of the International Fleet. Impressed by his tactical ability and ethical code, Graff keeps a close eye on Ender as he adapts to life on the space station, wins the respect of his peers and shows promise in the Battle Room, a zero-gravity training area where teams of students must work together to beat the competition.

Adapted from Orson Scott Card’s novel of the same name by director Gavin Hood (who rightly swapped the buggers of the book for the formics of the film), Ender’s Game finally arrives on the big screen after various false starts and troubled productions. Originally set to star Star Wars Episode I: The Phantom Menace actor Jake Lloyd in the leading role, with Card imploring fans to give the young actor another chance, the project was delayed until Hood came on board in 2010. Lionsgate then had to distance both itself and the movie from Card, whose involvement was being criticised by LBGT groups — some demanding boycotts — due to comments made about homosexuality and same-sex marriage.

Even without the history and controversy, Ender’s Game had its work cut out for it if it was to find an audience. Marketed as yet another Young Adult adaptation, the film would have to compete with the likes of Percy Jackson: Sea Of Monsters, Mortal Instruments: City Of Bones and The Hunger Games: Catching Fire, and it would have to do so with a cast that perhaps skewed older than most. Harrison Ford, as idolised as he is by men of a certain age, is unlikely to appeal to a child weaned on Harry Potter, while Asa Butterfield is best known for Hugo (more of a critical success than a box office one) and The Boy in the Striped Pyjamas.

In fact, Ender’s Game has more in common with Starship Troopers or even District 9 than it does Twilight. This is science-fiction with subtext rather than just space opera, and taking its cues from a story written nearly thirty years ago by an out-of-touch Mormon it is surprising just how relevant it still feels today. Certain tropes will certainly feel familiar — the Battle Room is the film’s Quiddich pitch or vampire baseball field and the final act is spent mostly in a ‘Kobayashi Maru’ simulator — but the rest is rather more novel. Children are assessed by video games, war is largely fought using drones and e-mails are censored by those in command. It’s also surprisingly — and remarkably — brutal; the film could easily have been subtitled: “It’s all fun and games until someone gets hurt.”

Ender’s Game is a very pleasant surprise with some impressive performances (Ford and Butterfield in particular stand out, while The Kings Of Summer‘s Moisés Arias certainly makes a splash), but the script doesn’t quite do the subject matter justice. The dialogue is stilted, the pace is at times plodding and some of the set pieces are a little beyond the budget’s means. That said, with the weightless scenes standing up even in comparison to those in Gravity there must be some style to compliment the substance.

Previous: One Chance
Next: Cloudy with a Chance of Meatballs 2