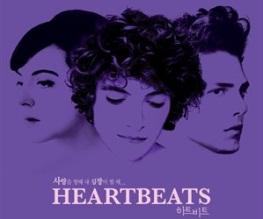 Francis (Dolan) and Marie (Chokri) are close friends living in Montréal who meet Nicolas (Schneider) through a mutual friend at a dinner party. Both, despite claiming initial indifference, are intrigued by the beautiful young man and as their obsession with him grows so does their rivalry, causing an inevitable rift in their friendship. Nicolas meanwhile, is persistently mysterious, his flirtatious aloofness giving away nothing about his availability or his sexual preference.

Xavier Dolan is a young man who believes in working hard to achieve his artistic goals. Heartbeats (Les Amours Imaginaires) is his second directing project, for which he was also scriptwriter, editor, art director and a producer, as well as financier until private sector investors stepped in to save the day. All this at 22 years old. Heartbeats reflects this passion for his art, every scene painstakingly crafted and edited to within an inch of its life. The examination of love may be painful but it is always beautiful; Dolan never puts emotion before aesthetics. And aesthetics are the life blood of this film, which is gloriously pretentious – not necessarily a criticism if it is as self-aware as it is flamboyant. Marie is a chain smoking, vintage dress-wearing bundle of neuroses who has perfected her defensive sneer as well as she has her glossy, Hepburn-homage hair. Both she and the fashionable, timid Francis hide their insecurities behind a fug of cigarette smoke, fabulous outfits and hilariously bitchy one-liners. One evening Marie and Nicolas go to watch a play, the wonderfully titled ‘Pains, Migraines and Sonatas’. When they emerge from the theatre, Marie lights up, holding the cigarette delicately between between her elegantly gloved fingers as she sniffs disdainfully. “So pompous,” she says, nose in the air. Whilst this irony makes gentle fun of Marie’s façade, it can also be applied to the film and its own preoccupation with the shape of things, which one feels (and hopes) Dolan has done on purpose. The theme runs throughout, exemplified in the characters’ obsession with a boy who is never more than their fantasised projections; who allows himself to be whatever they want him to be whilst staying tantalisingly out of reach. However, it seems neither of the leads would be happy desiring somebody pedestrian and easily attainable – they need the pain and the yearning for their love to feel real, while ironically, this unrequited element is what makes it not real at all.

Dolan favours slow motion close-ups of the characters with appropriate musical accompaniment, particularly the beautiful Nicolas, who closely resembles Michelangelo’s David and whose Grecian profile is ripe for the lingering shots that put the audience in Francis and Marie’s adoring shoes. Each of the pair’s sexual liaisons with people who are not Nicolas are surreally coloured in lurid red, green, blue or yellow, reflecting their own joylessness in the act. All these visual tricks add up to make a polished, picturesque whole. This focus on surfaces, however, need not detract from the performances, such as Chokri’s fine portrayal of the brittle Marie and Dolan’s introverted Francis. While the film does linger a little too long and Dolan tends to overuse the slow-motion button, overall the pace of the storytelling is not what is important; the picture is meant to be a contemplative journey through the ‘poetic craziness’ of love. It tends to skim the surfaces, and though the two leads are carved out well, a lot is left unsaid or unexamined. Dolan is an accomplished young film-maker, and if he can learn to explore depths as well as he can paint a canvas, he should go far. http://credit-n.ru/offers-zaim/denga-zaimy-nalichnimi.html http://credit-n.ru/offers-zaim/bistrodengi-zaymi-online-nalichnymi.html

Previous: Fists Of Rage
Next: Is Tron 3 on the horizon?