Mind of the Demon 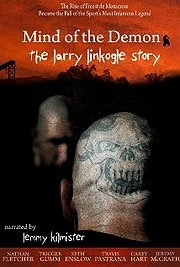 This is one weird documentary. It’s not bad, and it almost certainly achieves exactly the effect it’s going for, but it is an awfully strange effect. Do you know anything about freestyle motocross? You do? Well, then buy this DVD! It’s full of totally gnarly tricks! If you don’t, though, you’d better get comfortable with people using words like “rad” and “gnarly” in a completely irony-free manner. That said, it’s also amazing fun.

The film takes us through the life of a Mr Larry Linkogle, daredevil extraordinaire and freestyle motocross pioneer, as he plays his vital roles of inventing the sport, founding the “Metal Mulisha”[sic] and battling his drug problem. His own rise is so integrally linked to the sport as a whole that through examining the life of Larry, we’re also treated to front row seats for the birth of a new sport. This is done through interviews with those close (and not so close) to Larry, interspersed with sick tricks and narration from Lemmy.

Yes, Lemmy from Motorhead is the narrator of the piece, and whether he’s the best or the worst you’ve ever heard depends entirely on whether you’re looking for a good laugh or anything resembling human speech. His slurred, stilted delivery feels like your drunken friend trying to puzzle out the most bitchin’ motocross-themed crossword ever to cross the pages of the Times.

There’s something refreshingly honest about this film: it’s not some cheap studio cash-in trying to wring some money out of a sub-culture. It’s made by people who love freestyle motocross, for people who love motocross, and what it lacks in professionalism it makes up for in unpolished authenticity. And there are moments of accidental genius, such as the interview with Micky Dymond, whose title reads not “Freestyle Motocross Pro” or “Film-maker” or any such standard fare. Micky’s title is, we shit you not, “Gnarliest Rider in History”. We love that title so much it hurts us a little bit. It’s odd to say, but the tone of the film is such that it feels like a bit of a spoiler to say that Larry’s still alive. With everyone talking about his problems and downward spiral into drugs, to suddenly see him onscreen in the last ten minutes talking about his life to the interviewer is surreal. There’s a real feeling of “Dude, we thought you were dead.” It’s not clear whether this was the intended effect, since anyone familiar with freestyle motocross would surely know he was still alive, we guess? It’s odd, is the point.

What we have here is a film that, like the people involved, is still firmly in the 90s, when everything was X-treme and a man could make a decent living selling videos of motocross riders doing rad jumps. And you know what? That’s pretty awesome. Actually no, it’s not awesome: it’s gnarly.

Previous: Branagh and Fiennes to be honoured at BIFAs
Next: Top 10 Balltastic Films