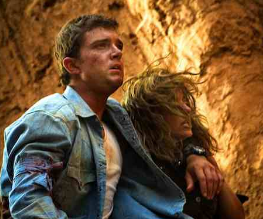 Hey, here’s some advice for ya – don’t watch the film Red Canyon. It’s crap. And not crap like some oh here’s a misguided and silly effort at making a film that is fascinating occasionally because it’s bad but you could see what they were trying to do, or car crash bad or laughably bad or so bad it’s almost like an avant garde meta-commentary on people making movies that they only realise part way through are awful but try to justify in a half-assed post modern way like ‘we meant to do this!’ You didn’t. There’s no point trying to pretend.

But anyway Red Canyon is crap, and it’s kind of repulsive, and it turns out the whole thing revolves around a horrible rape thing and the brother kind of let it happen. Oh, spoiler alert or whatever. It’s tawdry and awful and made me hate humanity. The plot’s something about this brother and sister who go back to their home town where some bad thing (rape incident, which we get to see a few times, because it’s so powerful or whatever) has occurred and it was in the disused mine where all of this sort of thing happens in movies. And the creepy guy is creepy and the other guy (policeman) is boring and in fact, the only thing of interest about this film is that they cast someone with so strong an accent that despite the fact he is speaking in English, there are subtitles on screen every time he utters something, like a news report from a foreign country, or one of those American documentaries where basically anyone with an accent that doesn’t sound like Tom Cruise gets the subtitle treatment.

BUT THIS GUY IS IN A MOVIE WHERE THE MOVIE MAKERS CAST HIM TO SPEAK ENGLISH AND YET HE IS STILL SUBTITLED.

And that’s the extent of the interest that any sane person would have in this film. Red Canyon is unmitigated gash. Here are some things that you could do instead of watching Red Canyon that will be more pleasant and less regrettable than suffering through that abomination of a film:

1. Nail your hands to a bus and allow it to drag you around town as children throw sweets and at you and scream ‘Bus Hands is a twat! Watch Bus Hands bleed!’
2. Listen to smooth jazz.
3. Count every single breath you take for a week, enter them into a logbook, post the completed logbook to a trusted acquaintance, and set yourself on fire.
4. Watch The Apprentice, but instead of thinking, wow, every person on here is a dickhead, try to imagine that these people are actually running businesses, and people are paying them money, and no one finds that strange or upsetting. Slip into a deep depression. Confine yourself to your bedroom for 20 hours a day, writing angsty poetry and engaging in pointless and endless debates on internet forums about the way that people always engage in pointless and endless debates on internet forums. Recover over a period of months and years through counselling, a healthy diet and exercise, and eventually gain the courage to ask a fanciable person out. Fall in love. Get married. Raise children. Grow old and wise. Accept your inevitable death but reflect on a life lived well and to the full. Then wake suddenly in front of the TV with stupid old Alan Sugar droning on and on and a bunch of dickheads are listening to him like he knows what he’s talking about and realise you’ve been snoozing and also you are on fire.
5. Every other thing that it is possible to do. If you’re thinking, well, what about if I carefully peeled off my skin, hung it on a hook, and dived into a bathtub full of vinegar – yes. That too.

Previous: Donald Sutherland onboard for Hunger Games
Next: Top 10 actors who should be cast as a superhero