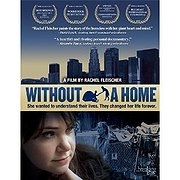 The title rather says it all, here. Without a Home is simple, earnest and doesn’t really tell you anything you didn’t know already. Somehow, though, that’s not the point; what we have here is very much one woman and her camera just heading out and filming. This manifests in a very idiosyncratic style, but one that isn’t without merit or value. There’s so much heart here, it’s hard not to feel your own being tugged a bit.

Rachel Fleischer has a camera. Rachel Fleischer is fascinated and concerned by homelessness. Rachel Fleischer drives around and finds homeless people to interview. This is the essential core of the film, but as she focuses on a half dozen individual cases and charts their lives over several years, we see something interesting: the concept of the Unreliable Narrator bleeding into a documentary.

As Rachel’s filming becomes more and more a part of her subjects’ lives, so does she, with all the pleas for help that come with that. Rather than simply document the life of a drug addict, she actively tries to get him into rehab, and, regardless of whether this is exactly good practice on the part of a documentary-maker, it does lead to a far closer emotional link to the subjects than the clinical objectivity or contrived sob-story style that characterises most of its ilk. What you’re seeing is genuine, because you’re living through it with her. The only word to truly describe this film is ‘raw’. There’s no attempt to romanticise the people she tries to help, and through the years there are as many lives that get worse as well as better. Watching Mike cry as he thinks of relapsing after two years clean just makes you feel it all the keener when it happens, but the film can’t justify it any more than Mike can, and doesn’t patronise you by trying. There are stories of hope: Gilbert, who starts the film by announcing “I love drugs. I love to be high”, gets clean and reunites with his wife; while a poor family from Compton finally getting an apartment has similar resonance.

But the people like Mike, who you meet after the ‘happy ending’, show that with this, as with all life, is by no means permanent. This film isn’t going to change your mind about the homeless: there’re plenty of unflattering portraits in there as well. There are certainly people who are simply gone at some fundamental level. Aric, for instance, aged fifty eight, who has played banjo on the streets for twenty-five years, finally finds a place to live. Yet when it burns down, killing a friend of his, he mourns how close he was to getting his life together not because he had a home, or was looking for work, but because he “almost had a producer for his edited screenplay”.

There’re no heroes and no resolutions in Without a Home. Fleischer’s attempt to add a moral at the end rings very hollow, as everything we’ve seen in the previous hour shows an absence of lessons that can be summed up in a few sentences. Maybe it’ll help you understand the homeless a bit better, maybe give you more affection for them, maybe less. It’s an honest and simplistic look at a problem with no real solutions. Take from that what you will.